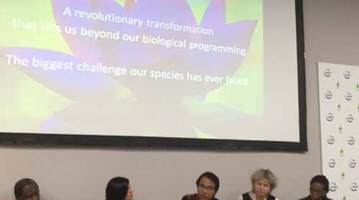 Reflections on Interfaith Dialogue at COP 21

“Politicians spoke like preachers this morning, now let them continue as believers.” So said Olav Fykse Tveit of the World Council of Churches, as the Interfaith Dialogue began yesterday afternoon, in the IUCN Pavilion at COP21. The commonalities emerging amongst a diverse range of speakers from Muslim, Buddhist, and Christian perspectives on the two panels of the Dialogue were striking. In a nutshell, nature and society are inextricable, we have a moral imperative for urgent climate action, and climate justice is inseparable from human dignity and well-being. The links with the schools of resilience and social-ecological systems thinking were resounding – albeit with an extra spiritual emphasis.

Monsignor Luis Miguel Muñoz Cárdaba of the Holy See quoted from the recent Encyclical on climate change, Laudato si’, in which Pope Francis introduced the idea of integral ecology, or the idea of nature and society being in constant interaction with each other. Fazlun Khalid, the founder-director of the Islamic Foundation for Ecology and Environmental Science provided a humorous example of interconnectedness, saying “the water I showered with today could have been in your bodies a few days ago”, and went on to ask why we commit violence on our fellow humans and non-human cousins when we are truly, in many ways, one. And Barbara Maas of the International Buddhist Confederation spoke about the recently issued Buddhist Declaration on Climate Change, noting the Buddhist idea of interconnected causality.

Yeb Sano, the ex-negotiator from the Philippines who has become a leading activist, talked about carrying a copy of the Laudato si’ on his recent 1,500 km pilgrimage from Rome to Paris, and noted that climate change is a symptom, not the fundamental problem, which rather lies with the three As: avarice, arrogance and apathy. Tessa Tennant of Our Voices said that since May 2015, people have walked or cycled seven times around the world, under the People’s Pilgrimage banner.

The strong role for hope in the path forward was emphasised by all. Speaking of which, the southern African region has cause for hope, judging by the strong role played by our colleagues in this event: Zambian-born John Nduna from the ACT Alliance made a strong call for an effective loss and damage mechanism, stating that some communities had already lost almost everything; Botswana’s Bishop Mosweu Simane described the climate justice agenda as “our Kairos, a moment we cannot ignore”; and South Africa’s Archbishop Thabo Makgoba delivered a thoughtful prayer. Finally, kudos to Cape Town-based Nigel Crawhall, IUCN focal point on faith-based organisations involved in climate change, who organised the event and was a wonderful moderator.