COP21 had a running kicking fighting start on Monday with about 150 world leaders gathering in Paris at the Le Bourget conference centre in the hope of providing a momentum to the climate negotiations that it badly needs.

French President Francois Hollande said in his address to the conference: “In eleven short days we must reach a universal ambitious climate agreement. This agreement should be differentiated, fair, lasting, dynamic, balanced, legally binding, and it must ensure that by 2100 greenhouse gas emissions do not cause temperatures to rise above 2 degrees Celsius. This is the challenge that your ministers and negotiators have. Together, let’s make sure that we make the conference in Paris the historic success that the world is waiting for”.

China’s President Xi Jinping began his statement with a quote from French writer Victor Hugo: “Supreme resources spring from extreme resolutions”, saying that the conference should reject the narrow-minded concept of zero sum gain and create a future of rule of law, fairness, and justice: “The Paris conference is not the finishing line but a new starting point”. He emphasised the need for countries to find solutions that are best suited for their particular national conditions and called on developed countries to honour their commitments to provide finance and support climate friendly technology transfer to developing countries.  He also stressed that the new agreement should not reduce developing countries ability to reduce poverty and improve living standards among its people.

At a Third World Network side event, China’s Head of Delegation, Su Wei, said: “It’s important for Paris to affirm that climate change is an imminent threat but it’s also important to remember that the causes of this problem are because of historical accumulations of greenhouse gas emissions. .. Paris is a very critical juncture in the longer process to address this challenge.”

India’s Head of Delegation, Ravi Prasad echoed Su Wei, saying: “We have been consistent that any outcome we have agreed on in Paris, must reflect the basic provisions and conditions in the Convention and is meant to enhance actions”. He said that all aspects of the Durban mandate must be included and the principle of CBDR* must inform all these elements: “Many of the INDCs of developing countries show that they are on the right track for addressing the causes and effects of climate change. … Developed country parties must show the lead in these efforts, and that’s one of the starting points that we want to see”.  He also said that the Paris actions must include work to reduce emissions in the next five years.

Bolivia’s Juan Hoffmaister said that support for adaptation is lagging behind, and adaptation finance accounts for only 18 percent of the global climate finance flows, which is significant given the commitment to move to equal distribution of funding for adaptation and mitigation.  He also said that Bolivia wants to see a mechanism for loss and damage that builds on the Warsaw mechanism.  A critical new issue, he says, is that of environmental refugees: “We need coordinated action to deal with the new notion of environmental refugees.  We’re not at this point able to cope with the extreme displacement”. 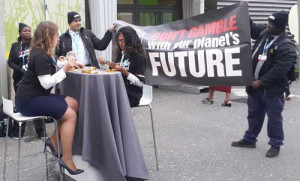 Image: Demonstrators at the climate conference

At the heads of states segment, USA President Barack Obama acknowledged strongly not only the present day effects of climate change but also his country’s role in creating the problem.  He said: “What should give us hope is that this is a turning point, this is the moment when we finally decide we are going to save our planet… it is within our power to do something about it”.  America’s emissions reductions target is 26-28 percent against 2005 levels within the next decade.

Perhaps the largest threat to the new climate agreement is that the USA may not sign is, and in that case other countries, particularly other large emitters, may feel justified in also withdrawing from the process.  For this reason, it is possible that emissions reduction targets and finance commitments will not fall within an legally binding aspects of the agreement.  President Obama, however, projects a sense of commitment to action on climate change, saying: “Here in Paris, we can show the world what is possible when we come together….  and let there be no doubt, the next generation is watching what we do”

As Su Wei said: “We still have time, it’s never too late to do something and speed up the efforts…The presence of 150 leaders of the world in Paris certainly gives a very strong momentum to this process”.

*Common But Differentiated Responsibilities; differentiation in terms of countries’ responsibilities for mitigation and covering the costs of adaptation is a key unresolved aspect of the new agreement.