Adaptation Fund: from accreditation to submission of proposals

“You need a strong and flexible institution to take it [the role of an implementing entity] on. It is a multi-sectoral task.”

The process of identifying a candidate for the role of NIE, conducted by the Department of Environmental Affairs (DEA), took at least a year. Having assessed the institutional landscape in South Africa, DEA concluded that SANBI stood out as the entity possessing the capacity and track record necessary for a NIE, despite its biodiversity based mandate, partly because of its track history in both science and policy engagement on climate change. A letter of support from the Minister of Environmental Affairs, Bomo Edna Molewa, specifically mandated SANBI with this additional multi-sectoral role, and SANBI proceeded with the accreditation process in January 2011.

SANBI received its accreditation in September 2011, making it one of the first five NIEs to be accredited by the AF. Following the accreditation, SANBI held an internal process to allocate staff designated to the NIE work, after which the proposal development phase could be initiated. SANBI’s priorities as NIE are informed by the South African National Climate Change Response White Paper (NCCRWP), thereby ensuring alignment of AF projects and South Africa’s national policy.

Following the phase of operationalising the NIE, SANBI organised a stakeholder workshop in October 2012, focusing on creating an understanding of the requirements of the AF and on sharing insights and discuss criteria for the strategy for AF Investments in South Africa. The workshop was attended by a wide range of stakeholders, including representatives from academia, civil society, government and business. Stakeholders argued that it is important that the project proposals submitted to the AF relate to each other, and that they are strategic in the national context. There was also a strong desire towards developing projects that deliver tangible benefits, particularly for the most vulnerable people and ecosystems in the country.

“We need to focus on projects that build the foundation to move forward.”

Stakeholder at the NIE workshop, October 2012 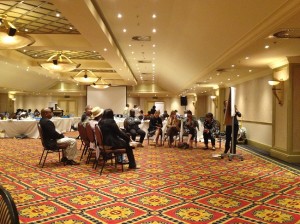 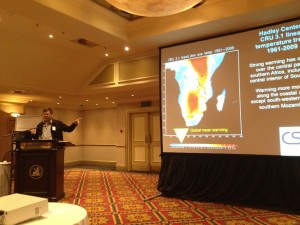 Following the stakeholder engagement the NIE went on to develop an investment framework.

On the 30th of November 2012 the NIE sent out a call for project concept notes, to which it received over 70 varied and interesting responses. A challenging selection processes followed, where the NIE was guided by the criteria of the AF and the NIE investment framework, and supported by the NIE Steering Committee with representation of SANBI, DEA, National Planning Commission, Treasury and civil society through the Adaptation Network. The process lead to the selection and further development of two project concept notes:

Both projects were submitted to the AF Board in May 2013, and received initial approval in July 2013. The projects are currently being developed into full proposals, due to be submitted for final approval by the AF Board during the course of 2014. The process of full proposal development will include further stakeholder consultations to strengthen the final submissions.