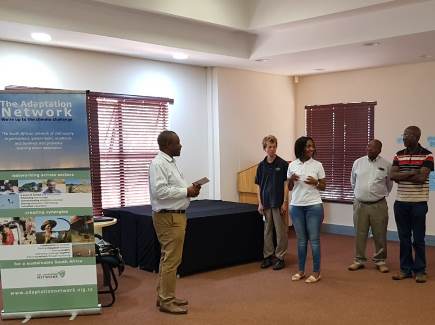 Following the Paris agreement adopted in December 12th 2015, our organisation, Humana People to People South Africa (HPPSA), has decided to aligned and take into consideration climate change issues/impact when carrying out its community development and empowerment focused activities which are currently in the sectors of Health, Education, Agriculture, skills training and poverty alleviation. It was for this reason that I represented HPPSA at a two days’ workshop on Practical Adaptation for Vulnerable Communities in Pretoria on 16 & 17 October 2018, hosted by the Adaptation Network. The article below is my reflection on this time and lessons Iearnt out of the workshop.

The introduction was very unique as it kept all participants on their toes, thinking, laughing and talking on top of their voices from the onset. The rules were very simple. A variety of small plastic animals were displayed on a table and each participant was asked to pick one of the animal objects and tell the other participants why he/she decided to pick that particular animal, its relevance or significance in terms of climate adaptation issues and lastly say their name and the work their organisation does in brief. It was interesting how this exercise set the pace of the day, energised all participants and gave a vivid picture on the original, varied, practical and abundant knowledge that all the participants had on climate adaptation. The first speaker picked a cock and said his reason for doing so was because this bird has no clock on or around its neck, but has been telling us the time in Africa from time immemorial. This is so true especially in the rural areas where the crow of the cock in the morning signifies dawn.

The Gecko on the other hand was hailed for being a great player in biological control as it feeds ferociously on mosquitoes and other vector carrying insects. Its appearance or pattern of distribution is therefore very much detected by the abundance of its preys, which in turn follow climatic patterns. It should be noted that the spread of mosquitoes is prevalent during the rainy periods as a result of stagnant waters which serve as havens for mosquito breeding.

Just like the Gecko, the Lizard was also introduced as another animal that preys on insects but most significantly on its adaptive features such as its ability to hibernate, or burrowing its eggs in the sand to withstand harsh climatic conditions. The famous African writer, Chinua Achebe, in his epic novel ‘Things Fall Apart’ also pointed out that the head nodding of the Lizard is an adaptive measure of self-appraisal or motivation: “The Lizard that jumped from the Iroko tree to the ground said he would praise himself if no one else did”.

Attending a training workshop will always draw lots of expectations from the participants, especially where there is a presence of participants with a diverse background. This workshop brought together participants from academia, research, CSOs, NGOs, FBOs and government. It was, however, amazing to see that the expectations of all these participants fell mostly under four main categories, namely; Climate Finance, Networking, Climate Adaptation activities and Capacity building.

Participants wanted to know how to access and where the funding for Climate Adaptation activities could be located locally, nationally and internationally.  After a fruitful deliberation on this, a long list of possible funders was realised. Most important was the link between the Green Climate Fund (GCF), Adaptation Fund (AF) and the country accredited institutes, or National Implementing Entities (NIE). It should be noted that SANBI is the GCF accredited NIE in South Africa and had disbursed close to $10million to carry out small-scale adaptation projects in Limpopo and the Northern Cape.

Other funders to watch are GIZ, DBSA and the Government of Flanders. The representative from the Government of Flanders, Katrien Vandepladutse, gave a good account as far as funding for climate change is concerned. She said, in as much as her government would like to provide funding for small grants, they don’t have the capacity to do so. She said it was easier to manage larger, as compared to small, grants. As to why some organizations made it during their last round of proposal awards, she said it was due to the following: technicality of the proposals, and too much of a focus on agriculture. They were looking for something out of the box, such as a focus on fisheries. She also talked of the importance of having long-lasting consortiums. Some consortiums are put together in an ad hoc manner in order to respond to calls. They preferred consortiums that had been together for many years and had a good track record.

Networking was considered to be very important as there is a need to form consortiums and become a force to reckon with as far as climate adaptation is concern.  It should be noted that NGOs working in the fields of health, livelihood, education and other empowerment sectors have very strong networks. Therefore, one of the resolutions taken during this workshop was that all the institutions represented must continue networking with one another through events, attending AGMs, taking part in learning journeys etc. The Adaptation Network must be recommended in this regard for organising the workshop and bringing together all the participants.

Participants had the opportunity to share their activities, challenges and best practices with one another. This was very important as all the institutions came up with a plethora of activities that were relevant to their climate adaptation work. One of the reasons while HPPSA was part of this training was to participate and learn from other participants and institutions that have many years of experience and whose core activities focused on climate change.

Two of the interactive exercises undertaken during the workshop that stood out for me were:

Building a tower (Tower of knowledge):

Unlike the tower of Babylon that took several years to build, participants in this workshop were divided into three groups and tasked to build a gigantic tower each in less than 10minutes using small prefabricated cardboard pieces.  Even though all the groups managed to come up with some sort of a tower structure, the main idea of this exercise was actually not about building the tower. It was about team work, figuring out how to do it, each participant getting involved, tolerating one another, sharing ideas, managing time and much more. It was a real energiser and portrayed some sort of a scenario on how teamwork can get things done when under pressure, e.g. rebuilding homes after a sudden destruction by floods or fire.

This puzzle was one such exercise that will stay with me for many years to come. It kept me spell bound from the onset to the last moment. Just like the exercise to build the tower, we were again divided into three groups but this time around with different roles that needed all the groups to collaborate in order to complete the task. Each group was asked to choose a name for itself; the first group received a pencil sharpener, the second three unsharpened pencils and the last group was given a large number of  pieces of paper to write on. The instruction was for each group to write its name on as many pieces of papers as possible using only the materials made available to all the groups. The objective was to write group names on as many pieces of papers as possible.

Negotiations were intense as each group needed the others in order to complete their task. In the beginning I could not understand why our group was given an unsharpened pencil to write on a piece of paper which we did not have. Within minutes it dawned on me that this was a negotiating game. At the end of the day all the groups managed to negotiate their way out, but the best negotiators carried the day having written their group name on the most pieces of papers. The lesson learnt from this game is that we need to collaborate and negotiate our way under pressure and facing challenges, in order to get across our climate adaptation messages. We need to convince the public, beneficiaries, financial institutions and other stakeholders that climate change is real and that now is the time to start addressing it, for tomorrow might be too late.

I enjoyed undertaking all these activities and meeting fellow climate practitioners. In particular, I thoroughly enjoyed connecting with Mncedisi Masuku of the Green Anglicans. I had always known Anglicans as being part of a Christian denomination, but with little or no knowledge on their involvement or understanding of climate change issues. Therefore, I was very eager to understand what the term Green Anglicans was all about and what they actually do.  Mncedisi made it clear that their denomination was very much aware of the effects of climate change on the lives of all human beings and ecosystems. He explained, from verses in the bible, that human beings have adapted to climate issues from the beginning of creation, and are called to be ‘stewards’ of the earth – living responsibly and sustainably, in harmony with nature. He concluded by saying that the ultimate aim of their organisation is to come up with a green bible that will highlight relevant verses from the bible and assist congregants to understand the altruistic messages of the bible, as well as the impact of climate change on their lives. This I think was very interesting and laudable.

In general, the workshop was great as we got lots of insights on climate change issues within two days. I strongly recommend more of such in the nearest future.