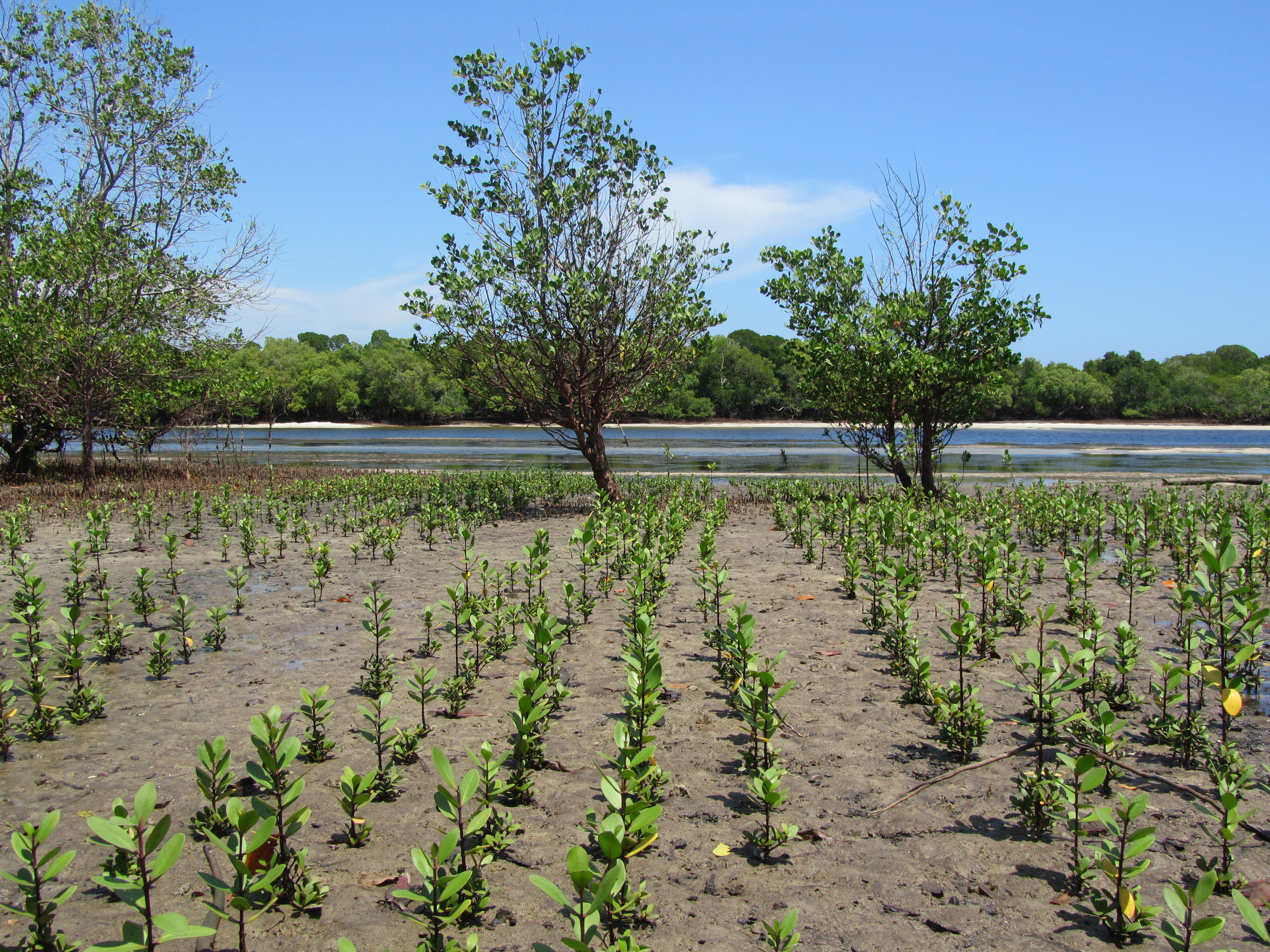 The advancement of national climate adaptation strategies and revision of countries’ Nationally Determined Contributions in 2020 is an important opportunity to include coastal ecosystems in official climate change response policies.

Despite the climate change commitments made under the landmark Paris Agreement in 2015, the world will continue to experience negative climate impacts. As such, pre-emptive adaptation planning is necessary to build and sustain countries’ social, economic and environmental resilience. For vulnerable coastal and island states, this can be done through the enhanced sustainable management, restoration and conservation of their marine and coastal ecosystems. Ecosystem-based adaptation (EbA), when used with other regulatory and legislative instruments, can harness ecosystems and ecosystem management to reduce countries’ vulnerability to climate change and secure a continued supply of ecosystem services to support broader sustainable development goals.

However, despite the recognition of their value, the modification and degradation of these crucial habitats has continued unabated, and marine and coastal ecosystems are still largely absent in climate change response measures. It is crucial that EbA be more fully integrated into national and sectoral policies, as well as budgetary and regulatory frameworks, particularly in small island states and developing countries with vulnerable coastal areas. The advancement of national climate adaptation strategies and the revision of countries’ Nationally Determined Contributions (NDCs) in 2020 is an important opportunity to include marine and coastal ecosystems in official climate change response policies.

EbA recognises that well-managed, diverse and healthy ecosystems provide multiple benefits to society, including important climate adaptation enhancement benefits. For example, the conservation or restoration of mangrove and wetland habitats can provide effective measures against storm surge, saline intrusion and coastal erosion. They also offer other wide-ranging, non-market ecosystem services that support social-economic development, such as food supply, carbon storage, livelihood diversification and water filtration. EbA approaches complement older, more established community-based natural resource and biodiversity management practices. The distinction, however, is that EbA focuses on climate change adaptation needs and benefits, and places these in the context of an overall resilience-building strategy. Yet despite the strong link between climate change and ecosystem management, the conservation and restoration of mangroves, seagrass beds, tidal marshes, dune systems, coral reefs, kelp and wetland areas is inadequately represented in national and regional climate change strategies worldwide. In fact, many national climate adaptation strategies make no explicit mention of these vital ecosystems. 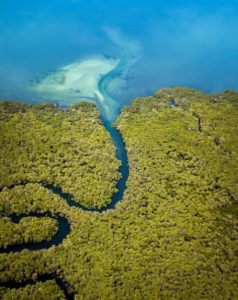 A healthy mangrove system in Mozambique. Mangroves are vitally important ecosystems which protect shorelines from extreme events such as hurricanes, prevent erosion, stabilize coastlines and provide nurseries and fisheries for a variety of marine species, amongst other benefits – in essence, mangroves are an extremely productive ecosystem that provides invaluable goods and services both to the natural environment and people (Source: Romy Chevallier)

In recent decades there has been a sharp increase in pressure on coastal and marine ecosystems, owing to a combination of anthropogenic and climatic threats. As such, these ecosystems – some of the most biologically diverse and productive natural systems globally – face unprecedented threats to their integrity and productivity (Agardy & Alder, 2005).  Recent studies indicate that, globally, 50% of reef-building corals have disappeared over the past 30 years (Bruno & Selig, 2007). In addition, studies show that more than one-fifth of the world’s mangroves have been lost over the past 30 years, and many of the remaining mangrove forests are degraded. There are several reasons for this.

From a governance perspective, these include the insufficient resources awarded to coastal and marine conservation (such resources are traditionally focused on terrestrial ecosystem governance), resulting in a lack of data and research to support its uptake. Various departments also have inconsistent mandates, and there are competing trade-offs with other large-scale energy and infrastructural developments in the coastal zone.

According to the Intergovernmental Panel on Climate Change – the UN body responsible for assessing the science on climate change – low-lying areas, including coastal and small island states, will be most susceptible to future climate impacts, because of their geographical positioning and direct exposure to extreme weather events, as well as the high population densities in coastal areas and on floodplains (Nurse LA et al., 2014).

Warming ocean temperatures, sea level rise and ocean acidification are responsible for the increased frequency and severity of tropical storms, shifts in the range of economically important fish stocks, and threats to coastal infrastructure – the implications of which are far-reaching for communities reliant on employment in artisanal fisheries, transport and coastal tourism. This, coupled with other socioeconomic challenges and the poor adaptive capacity of local populations, makes adaptation a key concern for developing countries. Valuable ecosystems such as coral reefs and mangroves thus must remain the focus of biodiversity conservation prioritisation schemes and a central component of marine protected areas (MPAs) globally. MPAs should also be aligned and designated in strategic areas to optimise their value for EbA.

The uptake of global EBA in climate policies

In the aftermath of the 2004 tsunami in Asia, mangroves’ dense root and branch networks helped to dissipate the wave action, lessening the exposure of adjacent communities and acting as bio-shields (Danielsen F et al., 2005).  As a result, mangrove restoration has been incorporated into various disaster risk reduction and adaptation measures globally, with many vulnerable countries embarking on ambitious national replanting programmes (Barbier E, 2006). This and other global weather events have encouraged the uptake of ecosystem-centred approaches to adaptation. In 2015 the UN’s Sustainable Development Agenda 2030 and its associated Sustainable Development Goal 14 ‘Life Below Water’ made the case for an enhanced focus on oceans and marine resources, highlighting the linkages between marine ecosystem health and human prosperity. The objectives of EbA are also echoed in other international frameworks, such as the Sendai Framework on Disaster Risk Reduction 2015–2030 and the Convention on Biological Diversity’s Strategic Plan for Biodiversity 2011–2020.

Although the importance of ecosystems broadly is mentioned in the text of the Paris Agreement, explicit mention of EbA or nature-based adaptation is made only in the NDCs of individual parties to the UN Framework Convention on Climate Change (UNFCCC). In 2017 at the 23rd meeting of the Conference of the Parties (COP23) to the UNFCCC various stakeholders made a concerted effort to place more focus on oceans and climate change. In fact, the Fijian prime minister, the COP president at the time, called on the global community to bring the issue of ocean health more formally into the UNFCCC process by 2020 through the Oceans Pathway Partnership and other initiatives.

The Paris Agreement sets out the overarching goals of and framework for international climate action in the post-2020 period. Having ratified the agreement in 2016, countries committed to specific actions through their own national climate strategies, including their NDCs. To date, 169 parties have submitted their first NDCs. These NDCs include not only countries’ plans to reduce emissions but also their strategies to achieve adaptation enhancement. As such, NDCs provide an opportunity to strengthen the inclusion of nature-based solutions in national adaptation actions, with a view to specifically increase the uptake of marine and coastal EbA projects. Countries are committed to submit revised NDCs every five years, with a review process that is intended to continually raise ambitions.

Countries are currently preparing and updating their NDCs for submission in 2020. Of the NDCs submitted to the UNFCCC to date, few refer explicitly to marine and coastal EbA. While many do refer to ecosystem-orientated visions for adaptation, these have rarely translated into robust targets that involve local communities.  To determine the extent to which countries have committed to using EbA, the UK-based International Institute for Environment and Development reviewed the adaptation component of all NDCs submitted to the UNFCCC (162 countries were analysed) (IIED & IUCN, 2016).

Many countries proposed a range of conservation, restoration, agroforestry and community-led approaches to achieve their adaptation targets. However, only 23 of these NDCs explicitly mention EbA. A few African countries described current marine and coastal EbA activities but many presented EbA as a future priority. For example, Madagascar’s NDC aims to restore 35 000ha of primary and mangrove forests by 2020.

Levels of integration and awareness of marine and coastal EbA differ substantially among countries. Other policy platforms can also be used for the inclusion of EbA, such as national adaptation programmes of action, disaster risk and resilience strategies and associated sectoral policies.

Common on-the-ground EbA approaches used in coastal areas include realignment or coastal retreat to manage sea level rise; designation of MPAs, conservancies and fisheries management areas to protect reproduction and important pockets of biodiversity; promotion of other sustainable livelihood options to remove pressure on ecosystems; and restoration initiatives related to coral, seagrass and mangrove habitats. Hybrid solutions such as offshore living breakwater structures and artificial reefs can also function as a barrier between the sea and land, providing habitats for species and aiding the restoration of coral reefs.

EbA options are not mutually exclusive, and a combination of approaches is the most effective. These EbA activities need to take place alongside wider management efforts that address coastal land use patterns, water quality issues and fishing activities to improve ecosystem conditions. This includes the adoption of tools such as integrated coastal zone management and marine spatial planning. The need for broader governance approaches to the health of coastal and marine ecosystems is underscored by the fact that approximately 80% of global marine plastic pollution originates from land-based sources (Sherrington, 2016). Also, given that many ecosystems are transboundary, EbA planning and implementation work best at landscape level. As a result, the Large Marine Ecosystems framework has become an established framework through which to address cross-border marine governance issues.

Romy Chevallier is a Senior Researcher with the Governance of Africa’s Resources Programme at the South African Institute of International Affairs (SAIIA). She holds an MA in International Relations from the University of the Witwatersrand.