In July I attended the annual Caux Dialogue on Land and Security in Switzerland (https://www.caux.ch/cdls-2018). The Dialogue is a part of the annual Caux Forum that brings together around 1,500 participants from around the globe, enabling civil society, government and business to meet in a true diversity of ages, genders, cultures, sectors and beliefs and encourages individuals, groups and organizations to reflect on their roles, explore their resources and assess their responsibilities as change-makers who can build a just, sustainable and peaceful world.

The Caux Dialogue for Land and Security 2018 aimed to deepen understanding of the links between land degradation and human security and to build the trust needed for effective ‘land-peace’ partnerships on the ground. The main focus of this year’s event was land restoration as a vehicle for conflict resolution in a world increasingly affected by devastating climatic impacts and political and economic turmoil.

The Deputy Executive Secretary of the United Nations Convention to Combat Desertification, Mr. Pradeep Monga reminded the participants that the land agenda lies at the core of the world’s food, poverty, migration, water, climate, biodiversity and security crises, creating an urgent need for investing in land restoration as a key instrument for conflict resolution and peace building. The participants also addressed the potential of cutting-edge and emerging technologies to unlock private financing, facilitate impact investments and enable participation of land users in land restoration projects.

In her address Olivia Lazard, Mediation Policy Officer for the European Institute for Peace brought into focus the state of insecurity in the world, and how the global economic and political system is destabilising communities that are home to many millions of people. Lawlessness in the Democratic Republic of the Congo is manifest in the presence of more than 80 armed groups, all of them brutal and some with genocidal roots. They survive by exploiting the natural resources of the country such as conflict minerals and timber and hiding in the communities. Their activities are driving ecological degradation throughout the country. Even in the national parks, most of the trees are gone, and the land is losing productivity. The government, army and businesses include individuals who have used their power to acquire vast areas of land. People without land are dispossessed and move from refugee camp to refugee camp. Elections cannot be held because of instability.

Predatory states have a unique and valued place in the global system as a source of strategic commodities, especially minerals. The digitalizing economy depends on resources that are easily available in countries that can be exploited. Our enthusiasm for alternative energy is one that depends on rare conflict minerals. This is driving these countries to collapse.

In the Sahel, there is increasing conflict between farmers and pastoralists and increasing cattle theft. Transhumance is practiced by largely Muslim groups, who are frequently regarded as foreigners. Extremism is growing in the most remote and deserted areas in the Sahel, which are also ignored by government. The jihadists tend to impose order and systems of justice that are frequently an improvement on the corrupt role of the army and government administrators.

Between 2006 and 2011, Syria suffered the worst drought in its history. 800,000 lost their livelihoods, and 200,000 lost their land. Dislocated to urban areas, they joined the 1.5 million refugees who had fled from the conflicts in neighbouring Iraq. Climate impacts combined with economic, market and political factors to deepen tensions and feed conflict. 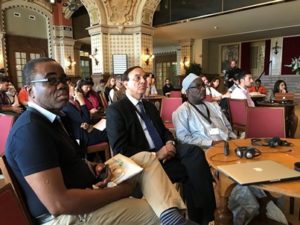 Lazard argued that conflict should be understood as a system, rather than a cycle. At all levels from very local to global, the conflict incentives run from the bottom to the top. Intergenerational conflicts, drug abuse, urbanized crime, the slave trade and gender violence are all on the rise. However, we don’t feel the impacts of the global conflict because we externalize the costs.

Lazard noted that increasingly ‘we forget to see ourselves as anything by reductionist versions of our ethnicity and our nationality.’ She cautioned the audience that ‘when we talk of regeneration, we have to be careful, because in some places regeneration (e.g. planting trees in DRC) can lead to conflict, violence and death. It must be accompanied by other processes to address the wider problems.’

The 2018 Caux Dialogue was a sobering experience that did not allow participants to escape into fantasy about the harsh realities of the evolving global order, yet the sharing of many positive experiences from around the world also allowed hope to flourish.