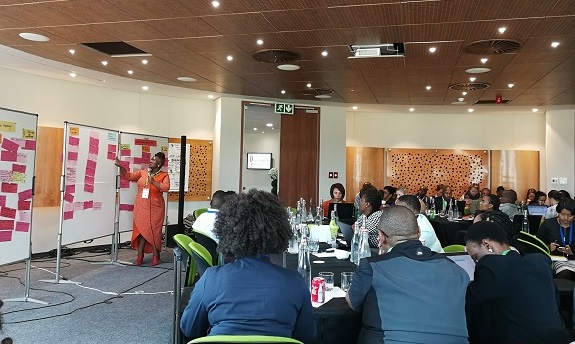 On the 19 and 20 March 2018, the Department of Environmental Affairs (DEA) hosted the extended national Climate Change Committee (NCCC) Workshop in Johannesburg, with the objective of providing a platform to facilitate wider stakeholder engagement on outputs/products of the implementation of the national climate change response policy (see National Climate Change Response White Paper). The meeting was attended by a range of stakeholders from government, business and civil society. Along with a number of other members of the Network, I attended and participated in this important event.

To put this event into its global and national context, the adoption of the Nationally Determined Contributions (NDCs) as a basis for implementing the global Paris Agreement places the responsibility for its delivery squarely on the shoulders of national-level government. Much depends on how countries and industries implement both the action required now and intensified ambition in the medium- to long-term. Whereas government must lead this process, it is clearly something that all sectors of society will have to contribute to.

The DEA is currently trying to quantify all the relevant policies and measures (P&Ms) in South Africa, which will assist with tracking SA’s performance towards meeting our commitments on the National Development Plan (NDP) under the UNFCCC. The NCCC Workshop provided the DEA with a platform to update stakeholders on progress made on various national-level policies and programmes and created an excellent opportunity for cross-cutting dialogue and robust debate on outputs of the NCCRP on topics relevant to both adaptation and mitigation measures. The first day of the dialogue focused on the National Adaptation strategy, with vigorous discussions around specifics of the chapters of the strategy, while the second day focused on discussions around climate change thematic areas, including climate finance, mitigation, adaptation, as well as climate change monitoring and evaluation.

The DEA led the workshop with a relatively relaxed and informal approach, ending sessions with question and answer sessions where relevant departmental liaisons responded to constructive comments – which enabled the meetings to be conducive to detailed feedback and inputs from the attendees.  The Dialogue was attended by a broad representative of civil society, business and national level government, with great representation from the stalwarts of the DEA. The cross-sectoral nature of the workshop, as well as the informal essence of feedback sessions (such as the ‘World Café’ held on Day One of the Dialogue around the NAS) and the capacity of the relevant DEA representatives to take the critiques on board, meant that a thorough and varied commentary underpinned the interactions across the two-day workshop.

The outline of the programme was:

Some key comments contributed by the public in the consultative process were:

Climate Resilience and Adaptive Capacity [NAS Chapter 5]: The vulnerability assessment purpose is not clearly defined; needs to avoid being too prescriptive to consider various contexts and sectors, which may not use the same approach-suitability of method; approach needs to allow flexibility as “no one solution fits all”; learning process around applicability needs to be improved; uncertainty around whether the framework enables building of resilience; there is a need to make the language specific (who are the practitioners? E.g. city planners/insurance agencies); important to try quantify the impacts of interventions and for practitioners to be able to prioritise these in implementation; missing research focus on informal settlements; further information gap on migration patterns (mobility of people), e.g. dispersement of people from coastal cities or areas aggravated by desertification within a broader regional context.

Climate Change Adaptation Mainstreaming [NAS Chapter 7]: cross-cutting vertical integration is paramount; the entry points for the NAS needs to be examined and understood for local and provincial government.

Climate Change Adaptation Policy, Planning and Implementation [NAS Chapter 4, 6 and 8]: there is limited legislative incentive and support for local government to prioritise adaptation; emphasis needs to be placed on horizontal and vertical alignment and integration; suggest inclusion of climate in provincial bioregional plans; there is a need to leverage existing tools such as the Integrated Energy Plan, NDP etc. in order to reinforce adaptation measures and instruments; extreme events should include both storm surge and sea level rise; the role of SALGA is unclear; the concentration on planning has the indirect result that there is a notable gap of key programmatic interventions that need to be considered; strategies for key sectors need to be linked to mainstreaming – for example, the plan for IDPs cannot be put in place as is, but rather needs to be mainstreamed within sector planning.

Comment was made that the previous version of the NAS was quite prescriptive and included a lot of project focus (e.g. ecological infrastructure), rather than looking at planning processes in a conceptual manner and balancing those with key interventions. The revised document tries to balance both planning and the implementation process.

While work is being done towards finalising the strategy, immediately upon assent of the Climate Change Bill (which needs to undergo the required rounds of parliamentary discussion), any substantive issues of the strategy will be reviewed. Both are being developed in parallel; however, the Bill precedes the NAS while the NAS tries to inform at a sectoral level (policy). The DEA clarified that the NAS is trying to establish which policy-relevant document could help in mainstreaming adaptation, but it doesn’t prescribe which specific policy document needs to be developed – thus it is less prescriptive than the Bill. For example, the Strategy examines how the national water plan can facilitate issues of adaptation – without prescribing to the Department of Water Affairs that they must have a water plan. The thinking behind the NAS is based on examining what tools are needed and what recommendations can be made. Once the Bill is signed, the development of the NAS will become a requirement of law. In the interim, the NAS will be the policy of government on adaptation until such time as there is an Act in place. In addition, the Climate Change Bill will clarify roles and responsibilities, and once it has been passed, issues related to cross-sectoral governance will be properly addressed, e.g. provinces will undertake risk and vulnerability (R&V) methodologies, and develop response plans etc. It remains important to focus on what the cross-cutting engagements are.

It is important to reiterate the relevance of the definitive players in the country’s vertical and horizontal integration of national level policies in upholding the NDC commitments:

Without attendance of all crucial representatives at relevant and timely workshops, seminars, trainings and focus group discussions, especially national-level hosted events such as the NCCC Dialogue where there is strong engagement with other business and civil society interests, the implementation of both adaptation and mitigation-centred solutions will not gain the momentum needed to catapult South Africa towards achieving its high-level climate change prerogatives.

With improved participation, relevant and critical stakeholders can be brought together in order to streamline climate-related best practice processes across the different tiers (national, provincial, local) of government, provide support to monitoring and evaluation of pilot project outputs, match under-capacitated municipalities to those which are able to provide practical lessons and benchmark cases, provide guidance for strategic planning (for example, with the private sector), coordinate climate finance opportunities, including support for proposal development, as well as allow the opportunity for civil society and the private sector to gain the understanding around national prerogatives, risk scenarios, and climatic fallout that might directly or indirectly affect them, while working to improve their own networks and collaborations.

On behalf of the Adaptation Network I would like to express my appreciation to our colleagues at DEA for enabling participation in this well-organised consultative workshop.