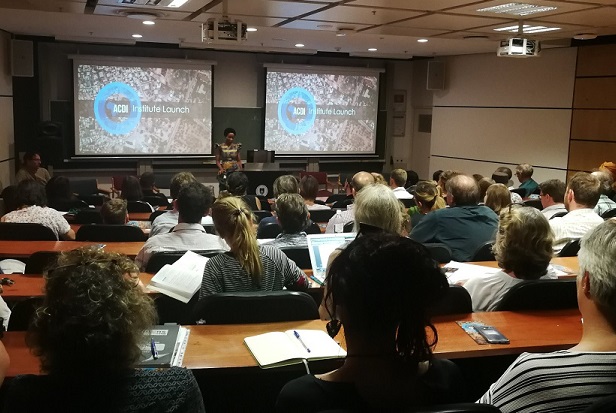 The African Climate Development Initiative (ACDI) recently graduated from being an initiative of UCT’s Vice-Chancellor to being a fully-fledged University Institute.
In honour of the new status, a celebratory event was held on the 16 April 2017 in order to acknowledge and thank both the internal and external partners that helped build the ACDI into the institution it is today, as well as reflect on the agenda for future successes and challenges.
Most notably, a panel discussion took place with highly-regarded panellists who were asked to propose their thoughts around “One Big Idea” that might help transform our current trajectory towards one that is more equitable and just, less environmentally damaging and carbon intensive, more kind and supportive, and ultimately build a better world for future generations.
The speakers are stalwarts of the climate field, renowned in their own right – Tasneem Essop (Energy Democracy Initiative), Mandy Barnett (SANBI Climate Fund), Kirtanya Lutchminarayan (WWF), Edgar Pieterse (African Centre for Cities, UCT), Bruce Hewitson (Climate Systems Analysis Group, UCT) and Harald Winkler (Energy Research Centre, UCT).

Each panellist was given five minutes to present their “One Big Idea”, and this was followed by a question and answer session with the largely academic audience.
Professor Edgar Pieterse began the presentations with a strong call for a fresh, political, cultural imaginary – a yearning for clear, emphatic, bite-sized actions that can be stitched together across developmental issues, including political challenges, in order to prescribe creative solutions and reconfigure the current unsustainable cultural narrative. The argument was based on the sensibility of “thinking-feeling-doing”, where individuals experience a sense of agency, and collective, pragmatic responses result in a profound sense of transformation through discrete actions.
Interestingly, all panel members emphasized the need for impactful actions at an individual level that collectively result in change. Mandy Barnett spoke of the importance of moving from ‘silos to systems’: using vertical and horizontal integration to better match the needs at a local level, such that communities are connected to the policy space, collaboration is increased across business, government and civil society, and the great divide between the scientific and societal interface is breached.
Professor Bruce Hewitson took this further at a macro scale, by querying how to use leverage points to allow the different (and often opposing) spectrum of players in the international negotiations and climate finance worlds to overlap, such that the ‘African’ voice can be heard within this arena. In terms of international funding, the ‘Western, educated, and from industrialized, rich, and democratic’ (or WEIRD) nations are typically the root of financial resourcing, which – he said – brings about both an ethical and practical problem in pre-supposing what the specific climate solutions might be for developing countries, which in turn limits the individual voice of experiential knowledge in a largely theoretical space. Professor Hewitson used the example of cohorts to reiterate how such leverage points can be used, where, for example, students are placed alongside practicing scientists in the field to address a particular climate or developmental issue, and are given the freedom to fail in (and learn from) addressing such problems. In this manner, individual experience can be better used to steer investments.
Kirtanya Lutchminarayan brought the discussion back to ground-level in her presentation, which was centred on the premise that one “cannot strive for theoretical change without acting in accordance” – that the ways to undo the planetary damage truly means going back to basics at an individual level; skipping the straw, cycling to work, building composting toilets in households etc. This means reteaching and relearning that nature is our means for survival as a species and undoing the centuries of harm from commodifying nature without paying the cost associated with its benefits.
In his presentation, Professor Harald Winkler brought home the point that creating new development pathways, which are more equitable and ecologically sustainable, must make use of leverage points to intervene in a system – with the most effective interventions being made at the point (mindset or paradigm) from which the system itself arises. Changing these systems requires changing the norm across social, cultural and political boundaries – it requires paying for mitigation efforts, while at the same time reducing consumption, assisting the poor, and changing the aspirations of the middle-class, who cannot follow the consumption pathways of the upper-income echelons without blowing the carbon budget.
Professor Winkler’s presentation flowed seamlessly into the presentation of the final speaker, Tasneem Essop, who spoke on the concept of a Just Transition – a complex, deeply political principle which at its core, deals with power dynamics within a system. More sustainable systems have to redress issues of poverty and inequality through a democratic approach which is seen to do justice because of the very reason that those who are least responsible will bear the biggest burden of our unsustainable consumption. Thus, a just transition puts the public interest above private, values smaller but often more efficient changes, internalizes externalities which may have been previously discounted, makes visible both formal and informal vested interests, and above all, decouples GDP as a measure of progress.
The panel was closed with a robust question and answer session, with insights from both the audience and the speakers that offered profound perspectives on the climate and developmental challenges faced. In essence, the take-home was that there is indeed an opportunity for radical change at a local and individual level; however, the fundamental change that is required will not happen without disturbing the current political and cultural framework.
Congratulations to the ACDI on an important milestone and in organizing a stellar event, where the audience was able to hear first-hand from the fore-runners of South Africa’s climate and development research.