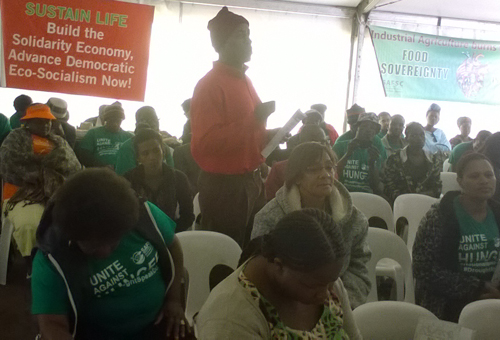 The World Food Programme estimates that about 795 million people worldwide – approximately one in nine people – lack enough food to lead healthy active lives. Developing countries host most of the world’s hungry people, with 12.9 per cent of the total developing country population undernourished. In Sub-Saharan Africa, the region with the highest prevalence of hunger (percentage of population that experiences hunger), one in four people is undernourished. Rising food insecurity in South Africa has translated into a situation where 14 million plus South Africans go to bed hungry each night, and where even people on social grants are unable to cope due to food price inflation.

It is in the face of these grim realities that Goal 2 – Zero Hunger of the Sustainable Development Goals (SDG) aims to end hunger, achieve food security and improved nutrition, and promote sustainable agriculture. Several organisations that support the Zero Hunger goal are rolling out interventions to address this global issue.

The South African Food Sovereignty Council, one of the organisations at the forefront of fighting food insecurity in the country, hosted an open forum in mid December to enable participants to deliberate on ways to reduce food insecurity. The event was attended by representatives from a number of organisations, including from countries such as Malawi, Zambia,  and Zimbabwe.

The forum opened with a People’s Parliament that afforded ordinary citizens, youth groups, child based organisations, and other civil society organisations to voice their concerns on the state of food insecurity and related issues, as well as share their potential contributions to addressing the problem. The grievances were compiled into a report with the intention of making a submission to appropriate authorities for redress.

The Food Sovereignty Act was launched at the forum as a blueprint to help civil society and government better address food insecurity. The Act, which received wide acclaim, integrates lessons on frameworks and laws that govern food sovereignty, taken from comparative studies in international best practices in Senegal, Bolivia, and Ecuador. It also incorporates aspirations of small-scale farmers and other grassroots organisations. It addresses most of the pertinent issues on the local food insecurity landscape

such as: use of indigenous seeds; rights of producers in relation to land; rights to water governance, use and ownership by small scale farmers; diets and cultural foods; promotion of local food supplies and community markets; participatory systems; corporate food systems; and the repeal of laws that are counter-productive with regards to food security.

The forum included panel sessions where individuals and representatives of grassroots organisations gave presentations on their work in addressing food insecurity. At a session titled Food Crisis in Africa, Rex Chapota of Farm Radio Malawi talked about overcoming information poverty in agriculture. A representative of the Inala Food Sovereignty and Climate Justice enlightened participants on how her student based organisation was addressing the issue of hunger on campuses. Other presentations touted the value of indigenous systems and way in which the physical, spiritual and natural realms support each other, emphasising the need to maintain balance between the three realms and therefore to integrate traditional knowledge systems into food production systems.

A common narrative that ran through all the presentations was that there is a need for us to rethink how we grow, share and consume our food.  Efficient and appropriate agriculture, forestry and fisheries practices can supply nutritious food for all and create decent incomes, while supporting people-centred rural development and safeguarding the natural environment. Ultimately, immense transformation in the global food and agriculture system is required if we are to be able to feed today’s 795 million hungry and the additional 2 billion people expected by 2050.  The food and agriculture sector offers key solutions for development, and is central to hunger and poverty eradication.