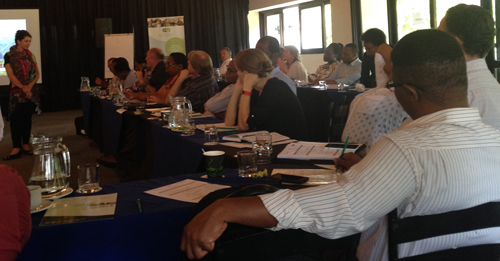 In 2016 the South African National Biodiversity Institute (SANBI) was accredited by the GCF as one of 44 National Implementing Entities, a significant milestone in the climate change adaptation finance landscape of South Africa.  SANBI is currently implementing two projects funded by the Adaptation Fund (AF). Based on the concept developed for one of these projects, A Small Grant Facility (SGF) – for adaptation projects addressing the needs of most vulnerable groups in Namakwa and Mopani District Municipality, SANBI has developed a project concept for the GCF aimed at expanding the work of the SGF. The significance of this approach for affected communities is that it is based on the concept of Enhanced Direct Access to climate finance, meaning that members of rural communities can access funding more directly “The concept was approved for the full project proposal stage before the GCF accreditation process of SANBI was completed,” said Mandy Barnett of SANBI.

As part of the process of developing a detailed project proposal, SANBI and the Department of Environmental Affairs (DEA) hosted a national stakeholder workshop on 16 February 2017 at the Birchwood Hotel & OR Tambo Conference Centre in Johannesburg. The workshop brought together about 100 individuals and organisations, including representatives of local and national government, non governmental organisations and the private sector who have been involved in the Adaptation Fund SGF projects and other small grants programs in South Africa. It was a platform for sharing experiences and lessons learned in order to inform the structure of the GCF project proposal.

Tlou Ramaru of DEA gave an overview of the GCF project concept within the national policy framework. He emphasised the importance of aligning the proposal with current adaptation planning and outputs, and using research that is already available, such as the Long-Term Adaptation Scenarios Flagship Research Programme (LTAS).

Mandy Barnett gave an overview of the GCF and AF, and emphasised that the GCF project proposal should be innovative and not a “business as usual” project. Questions from participants on specific project locations and groups of interest could not be answered at that stage.

Mike Jennings of SANBI introduced the GCF Project proposal which is aimed at enhancing South Africa’s SGF. He explained the three components of the proposal, which are: 1) Small Grants 2) Institutional Capacity, and 3) Learning.

The meeting included a Donors Panel, Facilitation Agencies/Intermediate Panel, and a Grant Beneficiary Panel. Each panel gave overviews of their experience of small grant programs in South Africa.

Carl Wesselink of SouthSouthNorth (SSN), the Executing Entity for the SGF projects, presented key learning points from a donor’s point of view. He said that it is challenging to comply with the rules and ensure integrity of the system while addressing the gap between grassroots and decision-makers. Another challenge for applicants is completion of the required adaptation risk benefit, which can ultimately lead to discouragement.  He proposed a shorter proposal process that includes an aspect of integrated expert involvement. Wesselink added that it is important to recognise that the rules of global funding might exclude direct funding to specific grassroots recipients and that other kinds of mechanisms should be developed to enable GCF funding to meet the needs of its target audience.

Annie Sugrue shared her experience with Luhlhaza/EcoSasa Small Grant Facility, saying that it has a very simple governance structure but there are still challenges and lessons that had to be learned. She recommended user-friendly templates, said that technical support staff is crucial for helping to complete documents, and encouraged collaborative approaches through requests for co-investment. Sugrue added that ownership of projects by the community ensures sustainable project output.

SGF recipients shared similar challenges and recommendations. Nyasha Chagwanda from World Vision recommended a mentoring and coaching program to involve the grantees in meetings/interviews to ease the reporting process, conduct of a skills audit of the grantees, simplification of financial reports, and providing the procurement policy as a checklist. Nyasha added that the SGF project has a WhatsApp Group that helps with communication, saying that the partner interaction is very good.

Chawana Khanyisa from Tsogang Water and Sanitation said that the project is well understood and supported within the community, and the community shows ownership of the project by investing through cash and in-kind contributions. She suggested that quarterly meetings with grant recipients would be helpful to support each other and build individual and organisational capacity. Setsoto Women’s Empowerment gave great examples of the river cleaning projects they are involved in using their small grant funding. Mary Raletooane indicated that the women involved in the project work on a volunteer basis with great enthusiasm.

Innovations for the GCF proposal based on what was presented during the meeting were discussed during group sessions. Some key ideas that emerged include:

The meeting gave those that are not directly involved with small grant projects insight into the internal complications that recipients and the donors face.  SANBI will compile the suggestions and comments that were given during the meeting and include them when developing the GCF proposal.

On the way forward, SANBI representatives said that the next steps would include further learning conversations with stakeholders, engagement with DEA to identify targets and investment windows, and finalisation of institutional arrangements before submitting a proposal.