According to projections provided by the International Panel on Climate Change (IPCC) there will be an increase in the frequency and severity of extreme weather events as the climate continues to warm. Extreme weather events such as floods, droughts and cyclones will cause destruction to economies, affecting vital sectors such as agriculture, water and tourism.

Climate impacts will consequently influence food security, population displacement and health. The impacts will vary spatially and effective risk management will be influenced by the financial capacity of affected countries.

Image below: Karsrivervlei in Bredarsdorp, Western Cape: A drainage system dug out to enable water abstraction for irrigation. Cattle graze in the fields on the right. 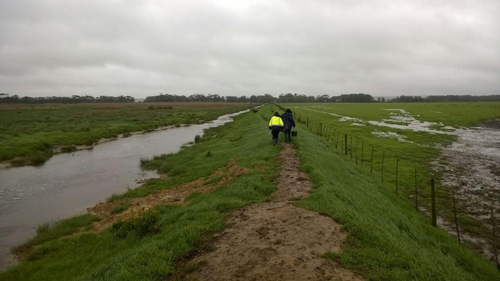 In many parts of the world, wetlands have been reduced to dumping grounds and affected by urban encroachment, industrial development, and unsustainable agriculture practices. In recent decades, the significant ecosystem services of wetlands have been recognised, most notably through the 1971 Convention on Wetlands (Ramsar Convention). In light of the proven value of wetlands to providing eco-system services that are essential to human well-being, the scientific community generally encourages and supports the rehabilitation and conservation of wetlands.

Wetlands are known for their remarkable functions in nature and have been recognised as an important and inexpensive tool in disaster risk management, particularly in the face of climate change. Wetland functions include the stabilisation of shorelines, flood control and regulation of water flow, all functions that can contribute to climate change adaptation planning.

Peatlands and mangroves, which are two types of wetland ecosystems, act as carbon stores. The protection of peatlands and mangroves thus plays a vital role in mitigation of climate change. In addition, wetlands provide habitat, food and other products for domestic animals and humans, thus contributing to building resilience and enhancing the sustainability of livelihoods.

The theme for World Wetlands Day 2017, Wetlands for Disaster Risk Reduction, highlights the role of healthy wetlands in reducing the impacts of extreme weather events and building resilience.  The Environmental Monitoring Group (EMG) and the City of Cape Town (Department of Recreation and Parks), in collaboration with GenderCC, Makhaza Wetland and Food Growers, and Khayelitsha Canoe Club, organised an event to celebrate World Wetlands Day on 02 February 2017.

The celebration was held at the Khayelitsha Wetlands Park in Makhaza and included a facilitated interactive session for 55 Grade 7 learners from Mpendulo Primary School.  Learners were taught about the significance of wetlands and the role their local wetland can play in their community and in disaster risk management.

Image below: Grade 7 learners from Mpendulo Primary School take part in activities during the celebration

The Khayelitsha Wetland is a lovely image of natural beauty and tranquillity.  The park was established in 1997 and since then concerted efforts by many role-players have contributed to achieving the healthy status it has today. Before restoration, the wetland had been highly polluted with discharge from industries and wastewater treatment works upstream. In addition, the area had been filled with waste from the surrounding residential area, and had become a hiding place for criminals and a hazard for children. The community of Makhaza took a stand and, with the support of EMG and Coalition for Environmental Justice, worked with local government departments and other partners to restore the wetland.

The rehabilitation initiatives undertaken included fencing the wetland, replanting fynbos plants, removing alien vegetation, and litter clearing by volunteers.  Despite these interventions, the water quality of the wetland is not up to standard and the wetland cannot be used for water abstraction, livestock, or water recreation. The community of Makhaza, however, still uses the wetland for collecting medicinal plants, traditional ceremonies, and as practice ground for the canoe club.