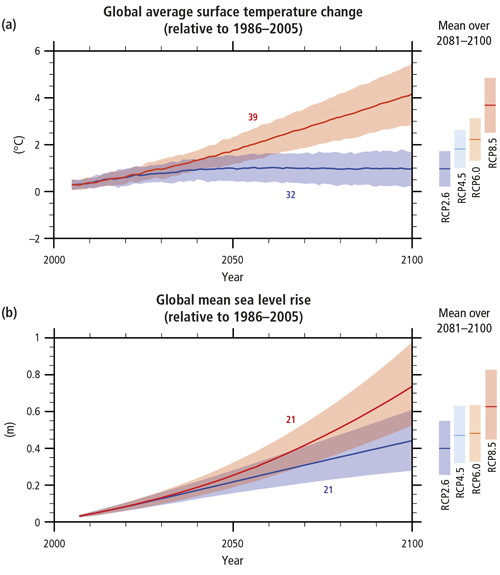 The Intergovernmental Panel on Climate Change (IPCC) held its 44th session in Bangkok, Thailand from 17 to 20 October 2016. Providing feedback on what he said was a very productive meeting, IPCC Chair Hoesung Lee highlighted the pending entry into force of the Paris Agreement, commenting that the policy environment is changing: “Policymakers are ready to act and need robust science to be able to formulate policy”.

The meeting discussed and reviewed the outlines of two IPCC reports, the Special Report on the impacts of global warming of 1.5°C above pre-industrial levels and related global greenhouse gas emission pathways that is due to be completed in 2018, and a new Methodology Report on national greenhouse gas inventories, which is due for completion in 2019.

Co-Chair of the IPCC Task Force on National Greenhouse Gas Inventories, Kiyoto Tanabe, explained that the decision to produce a new methodology report was taken because of advances in the scientific and technological arenas for accurate measurements of greenhouse gasses since the last guideline was published in 2006. The new methodology is intended to provide governments with updated knowledge on how to estimate the level of their greenhouse gas emissions and reductions, which is important for tracking progress on meeting their commitments under the Paris Agreement and the UNFCCC.

In December last year, the Conference of the Parties of the United Nations Framework Convention on Climate Change (UNFCCC) invited the IPCC to produce the Special Report on 1.5 degrees, in the context of “strengthening the global response to the threat of climate change, sustainable development and efforts to eradicate poverty”. Image below: Intergovernmental Panel on Climate Change, Fifth Assessment Report, Synthesis Report 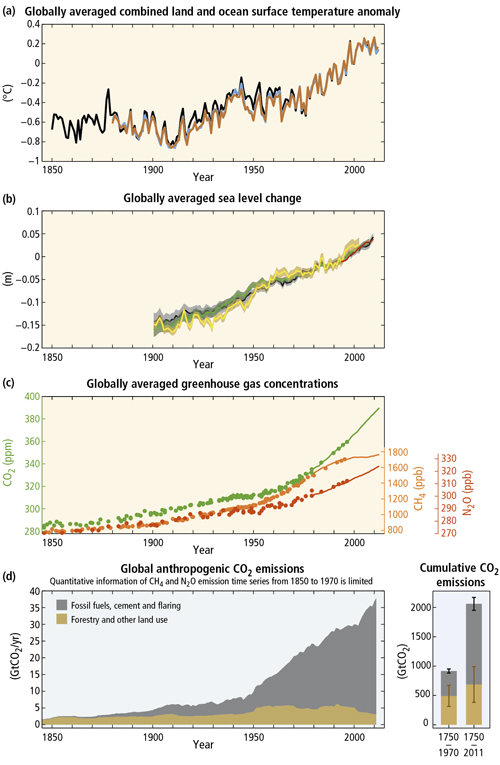 The work on the Special Report is led by Thelma Krug, who is one of the three IPCC Vice Chairs.  She explained that at the time of finalisation of the IPCC Fifth Assessment Report (AR5), “the science was not evolved enough to provide enough support” for the 1,5 degrees Celsius limit, and thus the invitation to focus on 1.5 degrees and associated impacts. When asked whether global warming would reach 1.5 degrees before the Special Report is published, she said: “No..…when we talk about 1.5 degrees, we are talking about a time series to see if this indicates a trend”.

A scoping meeting for the Special Report took place in August 2016 in Geneva, Switzerland. Selected participants included stakeholders from academia, government institutions, international organisations, civil society, and the private sector with expertise in scientific, technical and socio-economic fields. In addition to this being a gender balanced group, Krug pointed out that 51 per cent of the scientists in the group are from developing countries, which she said is essential for creating a report that gives a cross sectoral and broad view of the impacts of warming of 1.5 degrees Celsius.

Earlier in October the African Climate and Development Initiative (ACDI) of the University of Cape Town held a seminar that brought together a few of the South African experts who were selected to participate in the scoping report. This included Harald Winkler from the Energy Research Centre, Bruce Hewitson from Climate Systems Analysis Group, Anton Cartwright from African Centre for Cities, and Mark New from ACDI.

Winkler gave a background to the Special Report, discussing the contents of the Paris Agreement and outlining the activities of the IPCC Working Groups. He said that at the scoping meeting participants were asked to discuss, create and agree on an outline for the report, a process that first time IPCC participant, Anton Cartwright,  described as interesting to observe, inclusive, and a platform for innovation amidst traditional thinking.

After a rigorous session with groups and individuals lobbying for and debating over the inclusion of specific topics, titles and text, an outline for the report was proposed. South Africa was able to succeed in including the topic of equality in the report. The outline was discussed further in Bangkok and agreed.  Authors of the report will determine the details of the content, in light of available scientific literature.

Outline of the Special Report on 1.5 degrees Celsius

Chapter 2: Mitigation pathways compatible with 1.5 degrees Celsius in the context of sustainable development

Chapter 4: Strengthening the global response to the threat of climate change

Chapter 5: Approaches to implementing a strengthened global response to the threat of climate change

Commenting on the process, Krug indicated that the final decision on the outline did not differ much from what the participating scientists had initially proposed. Lee added that the originally proposed Chapters 4 and 5 were however merged to produce a more sharpened focus chapter which he said will give more strength to the implementation of the report.

In response to a question on addressing the management of potential conflict between scientific reporting and political influence, Krug said that the process had had very little political interference so far. Hoesung added the assessment of scientific literature for the IPCC reports should be able to help policymakers with their decisions, and that the IPCC does not produce prescriptive reports.