The Paris Agreement is the result of a historical convergence of the vastly differing positions within the climate negotiations, and in the months since it was adopted momentum has been growing to secure early entry into force.  Happy Khambule of Project 90 by 2030, however, lays out the argument for why world leaders should not expedite implementation of the Paris Agreement before 2020.

In December 2015, people were relieved and delighted that the international community had adopted the Paris Agreement. After all, the 17th Conference of the Parties (COP17) of 2011 in Durban had paved the way for a new agreement, going as far as defining its key elements as well as setting a date for it to enter into force – 2020. Adding to that momentum, China and USA struck a bilateral pact just before COP21 that made the process of arriving at the Paris Agreement seem ever so effortless despite the many hiccups, including issues around the accounting and verification of climate finance.*

The Paris Agreement is a wide reaching agreement and an ambitious agreement; it covers all parties, and all three pillars of climate change – mitigation, adaptation, and loss and damage – with commitments from many countries premised on the facilitation and provision of means of implementation. Significantly, it seeks to leverage further ambition on climate action with regards to limiting global warming to 1.5 degrees Celsius.  But it has to be remembered that the Paris Agreement is only part of a basket of international instruments under the UNFCCC. It is a significant add-on to preceding climate deals, notably the Cancun Agreements and the Lima-Paris Action Agenda, as well as the Kyoto Protocol.  The  Kyoto Protocol is still theoretically alive until 2020, but the second commitment period is not yet in force because, among other reasons, the necessary threshold for ratification has not been achieved.

Image below: Civil society protesters at the Paris negotiations calling for stronger action from governments 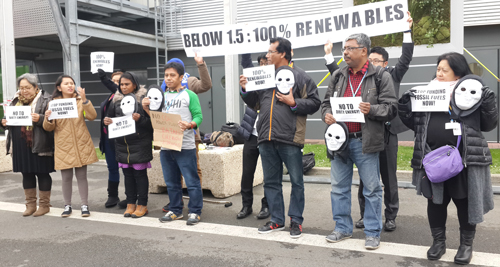 Early entry into force of the Paris Agreement with implementation beginning in 2020 is welcome – if it means that parties will focus on fleshing out modalities of the agreement in a manner that enables a growth in stature of the Agreement while creating conditions that facilitate significant emission reductions as well as increasing adaptive capacity of parties. However, if early entry into force is used as a way for developed country parties to shirk their responsibility to meet their pre-2020 ambition, commitments and pledges under the UNFCCC and Kyoto Protocol, then the most significant result of climate multilateralism is at stake. Not only will we lose Paris as a moment that signalled the global transition to a low carbon economy, but we will also negate its value as a trust building exercise.

The key reason given for early entry into force is that contributions under the Paris Agreement are not enough to achieve its goals, yet the Agreement is a result of the ailing of UNFCCC instruments.  If existing commitments under the Kyoto Protocol and the UNFCCC are met, there would be less pressure on the Paris Agreement to achieve unnecessarily high and incomprehensible targets. Existing mitigation commitments under the Convention include such tools as the Nationally Appropriate Mitigation Actions.

Some proponents of early entry into force claim it will result in steeper emission reductions by creating greater urgency for action and bringing forward developed country emission peaks, with developing countries being allowed to peak emission at a later date to account for their developmental needs.  However, the international climate change space is a complex and fragile membrane, and there are many uncertainties about the implications of the Paris Agreement entering into force before 2020, and great potential for unintended consequences.

For a start, not all countries are confident that structures and mechanisms in the Agreement will be ready for early implementation of the provisions of the Agreement.  Further, there is vagueness about whether the second commitment period of the Kyoto Protocol would still be in force or simply fall away.  Should the Kyoto Protocol be brusquely terminated or overall pre-2020 ambition swept under the carpet, it is possible that there will be no real further emission cuts.

Early entry also means that many countries run the risk of undermining their ability to undergo thorough domestic processes of ratification. In South Africa’s case, the government would be undermining the constitution as well as parliamentary process if it accelerates ratification. It will take South Africa at least two years to complete the ratification process – anything less would be regarded as unconstitutional and most likely invalid. Public participation and parliamentary procedures are key considerations when international laws/instruments are domesticated, as well as generally when the legislature fulfills its mandate.

There is a further risk that if the Paris Agreement enters into force early, countries that have not ratified will become excluded from further engagement and decision making around the Agreement. There is also uncertainty about how binding the Paris Agreement is under international law if the full domestic process of ratification is not followed, and scope for countries that have not ratified to declare themselves exempt from their commitment to not defeat the objects of the Agreement.  For civil society to be able to hold our governments to account on the commitments they make under the Convention, we need for the process of ratification to follow thorough legal domestic processes.  This also becomes important when countries wish to hold each other to account.

Image below:  Happy Khambule presenting an award to Judy Beaumont on behalf of French civil society organisations for prioritising adaptation at COP21. Beaumont is Deputy Director General in the Department of Environmental Affairs of South Africa, Khambule is Policy and Research Coordinator at Project 90 by 2030. 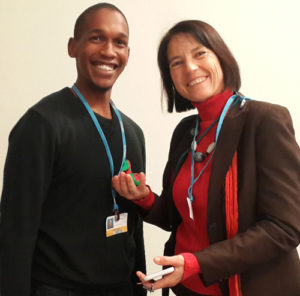 Yet another reason for concern for climate justice activists is that USA has too much weight in the design and entry into force of the Agreement. The Agreement is already heavily nuanced in favour of US politicking such as the exclusion of liability in relation to the loss and damage mechanism, which is a compromise that dismays many already-vulnerable communities and states**. It matters not whether one agrees with this notion, but it is important that text was inserted into the Paris Decisions that disallows countries from holding others liable for the impacts of climate change in order to guarantee that the USA becomes a party to the Paris Agreement.  Now suddenly, although many will profess ignorance of this eventuality, the political situation in the USA will possibly trump climate negotiations and international law.

First of all, this kind of USA-focused thinking was what resulted in the weakening of the Kyoto Protocol over a decade ago. Secondly, this does not bode well for international negotiations where the relevance of many parties is diminished. If the aim is to use the agreement to circumnavigate the renegotiation of the USA’s contributions under the agreement, and should that be the desire of the USA (or any other party), the international community should ensure that it is done in line with negotiating principles, especially with the aim of resolving all outstanding issues before entry into force, so that there can be a real and unified meeting of the minds (between all concerned parties). When considering the renegotiation of contributions in light of recent national circumstances, there should be no confusion with reservations provided for in the agreement.

Finally, given the prevailing push from industrialised countries for developing countries to make unconditional contributions (INDC), there is a risk that early entry into force could reopen existing and emerging rifts that the elegant diplomacy of the French leadership in Paris sought to mend.

The predominant school of thought is that entry into force will be in 2020. But before the agreement comes into force, there are three thresholds that need to be fulfilled:

An agreement like the Paris Agreement is not binding on the parties until certain conditions are met, and one cannot hold one threshold above others while placing any party or parties at a disadvantage.

Accelerating entry into force, and subsequently implementation, is not prudent.  In this case, slow and steady should be preferred. The very reason the world is in this situation is because of a rush to exploit resources, and also a rush to find solutions at whatever cost. At this moment, the international community has a period of time to do things better. If the pressure for early entry into force is sustained, the Paris Agreement will fail.

* The United Nations Framework Convention on Climate Change (UNFCCC) is “ruled” by the Conference of Parties (COP), which meets annually.  Usually the host country nominates the President.  COP17 was held in Durban in 2011 and COP21 was held in Paris in 2015.