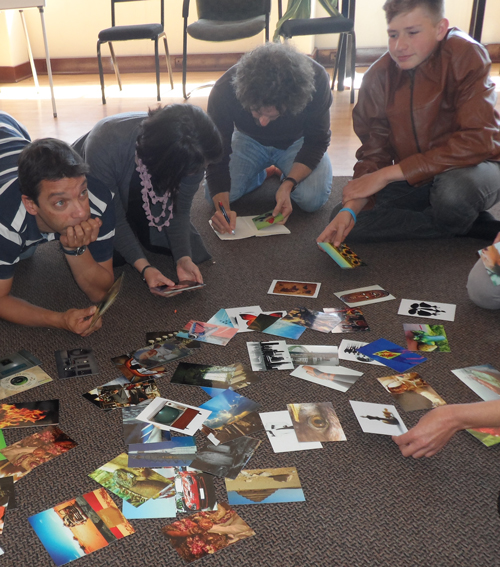 Many scholars, educators, and other professional practitioners are committed to improving the way science is conveyed to policy makers and the public, and the arts is increasingly becoming a preferred channel for science communication.

In science education there is often a focus on the cognitive domain, namely understanding, comprehension, or application.  Arts-based communication instead is able to deeply engage people by stimulating the affective domain of learning, namely engagement, attitude, or emotion.

Image below:  Participants of the workshop engaged in a learning game 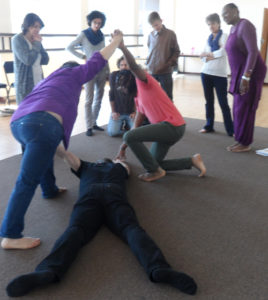 With the objective of reinvigorating creative facilitator approaches for greater empathy, effectiveness, and impact in a playful atmosphere, Game Changers held a workshop, Applied Improvisation for Empowerment and Resilience, in August at the Drama for Life rehearsal studios, University of Witwatersrand. The event attracted professionals from international NGO’s, local government, United Nations High Commission for Refugees, Department of Applied Drama, Department of Industrial and Organisational Psychology, and South African Institute of International Affairs.

Through processes such as networking, brainstorming, and anticipating application in practice, participants were encouraged to bring their individual interests to the surface and shape the programme for the day. Some participants aired their frustrations with the conventional workshop mode of science communication. Others said that questions and answers in most workshops or formal presentations are too stereotyped, and wanted to explore alternative ways of engaging with people whilst avoiding approaches that elicit “precooked answers”.

The effectiveness of arts-based science communication for awareness creation or influencing public policy in both formal and informal settings was discussed.  Some suggested that participatory, community-based approaches, which empower the audience as collaborators or makers of art, are more useful than situations where knowledge is imparted by experts to a public that is regarded as lacking scientific understanding. Other participants, argued that participatory approaches follow a simple logic; being informed about an issue is not the same as being engaged with it in a constructive or useful way.

By engaging both domains, arts-based science communication enhances creativity and discovery. Such experiential learning helps create common space for people to relate with information and each other.  As one participant explained, it is “convenient for education in deprived communities where some basic amenities like electricity may not be available, because you can tell a story even where there is no electricity for you to make a conventional presentation”.

As participants deliberated on how different tools can be applied in various fields, those with a background in storytelling and theatre improvisation shared their ideas for themes that explored the interface between empowerment, resilience, and applied improvisation. Others introduced engaging games and exercises that are useful for working with communities and change agent facilitators for exploration, learning, exchange and change.

Participants formed groups and practiced some of these games.

People to people: one person stands in the centre of the circle and the rest of the group stands in pairs. The person in the centre calls out body parts for the paired participants to touch, for example toe to toe or elbow to elbow. This game is a way of enhancing intimacy and breaking into people’s individual space. However it is important to consider culture and context; for example it could be inappropriate to ask people to touch noses, and some people may find any form of touching invasive. The game is voluntary and people are excused from participation if they so indicate.

Courtroom game: In this game there are four participants: judge, prosecutor, accused, and defence. Without prompting, the quartet initiate a scene. When the facilitator claps, participants change roles until all players have played all roles at least once. Participants said they experienced feelings of empathy as they were put into one another’s shoes and changed roles and power relationships.

Some variations proposed for this game include:

Pictures game: A pile of photos is spread on the floor and participants work in groups of three.  Each group identifies a theme, and selects a photo inspired by the theme.  The interpretation is discussed within the group. After the key words associated with the picture are brainstormed, the group then forms a statue to represent the concept.

A key  outcome of the forum was the formation of a nascent community of collaborative, creative facilitators working in relief, development, social change.