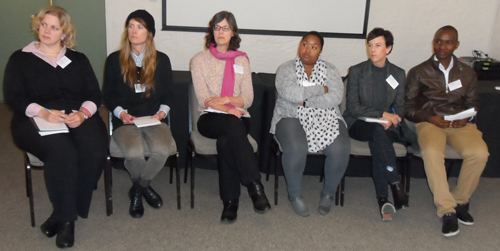 With the aim of supporting young people in sharing their experiences and engaging in adaptation, the Southern African Adaptation Colloquium included a facilitated discussion that was focused on identifying narratives that resonate with youth.  Participants also explored communication strategies that can be used by practitioners who are looking to engage young people. Participants in the panel discussion included representatives of Youth@SAIIA, South African Youth Climate Coalition, Young Women in Climate Change, and Environmental Monitoring Group.

Annabel Fenton of the South African Institute of International Affairs (SAIIA) said: “Throughout my experience as a participant in youth programmes, one of the biggest challenges we face is that academics and diplomats have certain presumptions about the capabilities of young people – often boxing us into a form of tokenistic representation. Our message as participants in the Youth@SAIIA programmes is that we are actually very capable: some of us have done in depth research about the issues being discussed, and we are eager to engage.”

She explained that as a think tank in Africa, SAIIA runs youth programmes that engage people between the ages of 14 and 25 years old in international affairs, climate change discussions, and other issues that impact their world. The youth programmes, known as Youth@SAIIA, have three spheres of influence: high school programmes, an annual Young Leaders Conference, and the Youth Policy Committee.

The Environmental Sustainability Project partners with Model United Nations debates and an Inter-Schools Quiz to encourage learners to engage in pressing social themes.  Participants write research papers on key themes of sustainable development, climate change or biodiversity, and link them to other issues such as health, food security, or human settlements. In the research papers, learners compare case studies of environmental action and then make recommendations based on their outcomes.

Learners who excel in the programmes are invited to attend the national Young Leaders Conference where youth from various backgrounds around the country meet to discuss their development priorities, and then present a declaration to government officials. Youth are also invited to take part in the Youth Policy Committee, which aims to increase youth participation in policy discussions.  Some committee members have been part of panel discussions at the Paris climate conference, the World Humanitarian Summit, and other important negotiations.

Noluthando Nzimande of Young Women in Climate Change explained how, under the slogan of keep it natural like hair, her organisation uses innovative ways to communicate climate change adaptation to young women: “I believe that climate change adaptation should be modeled from a personal perspective before we think about strategies and educating other people. Black women have always believed that it’s difficult to maintain their natural hair. After learning about the ingredients that are in hair products and the way they are manufactured I realised that I needed to find healthier ways to stay beautiful.  I am currently using pure oils on my hair that are locally produced. As part of my adaptation strategy, I am encouraging ecofeminists who believe in a fossil free future. I am starting with women who are willing to be different, and I am keeping it natural.”

Image below: Kennedy informal settlement in urban Durban, inhabited mainly by immigrants from rural parts of South Africa and other African countries

Siyabonga Myeza of Environmental Monitoring Group spoke of the need to enhance inclusiveness of grassroots rural youth in adaptation conversations. He said that the grassroots groups of Johannesburg, for example, are very different from those of a small town in Northern Cape, and it is imperative to take cognisance of this difference when talking about climate change adaptation, or risk getting an incomplete youth perspective.

He continued: “We need to ask ourselves how we can engage creatively and mindfully in the face of the competing needs that the youth of South Africa face. How can we weave climate change and adaptation into the existing challenges rather than making it a new layer? As young people we need to work together to change the nation and ensure that the research community stretches further into rural spaces to facilitate better understanding of the subject by more people”.

At the historical climate conference in Paris last December, the importance of engaging youth was acknowledged through a special Youth and Future Generations Day that was dedicated to supporting youth in challenging world leaders and making their voices heard. As the generation that will inherit the reality of a changing climate in their own lifetimes, they are potentially best placed – and most motivated – to generate an ambitious societal response that will avoid the most dangerous risks of climate change. Young people therefore need to be an integral part of the climate change adaptation conversation.