Building rapidly on the warm reception given to the Africa Renewable Energy Initiative, the African Group of Negotiators (AGN) developed the African Adaptation Initiative (AAI), with a similar objective of ensuring that African countries lead the work in adaptation and loss and damage on the continent.

AAI is intended to scale up adaptation in Africa, through enhancing pre-2020 ambition on adaptation and addressing loss and damage in its initial phase, and providing a platform to enhance medium and long term actions.  Its work programme includes mapping of existing and future adaptation programmes, supporting countries in undertaking needs assessments, facilitating access to resources, and coordinating and facilitating regional and national efforts to assess and address loss and damage.

AAI has four thematic pillars for which specific objectives and quantifiable targets have been set:

Image below: Overview of the African Adaptation Initiative 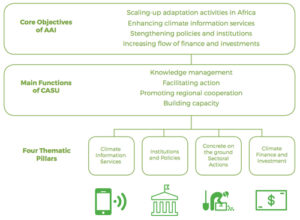 Kulthoum Omari, the AGN coordinator for the initiative, explains: “We are in the early stages of the initiative.  We are now adding substance to the four pillars – we want to have concrete activities for each of the pillars including outputs and costs.  We are aiming for a very clear programme and action plan for the period between now and 2020”.

African governments will drive implementation of AAI, and a Continental Adaptation Support Unit (CASU) will be established to coordinate efforts and link work across regions and development partners. CASU will include an independent technical secretariat and delivery unit, and will be responsible for  knowledge management, facilitation of action, capacity building, and promoting co-operation and partnerships.

CASU is reported to require about USD 200 million between 2016 and 2020 for effective delivery of its core functions, in addition to USD 20 million to operationalise and sustain it.

The African Adaptation Initiative is led by the Committee of African Heads of State and Government on Climate Change (CAHOSCC), and endorsed by the African Ministerial Conference on the Environment (AMCEN). It was launched last December at the Paris climate change conference.  A technical working group, co-chaired by the AGN and AMCEN, will meet towards the end of this month to add more detail to the programme for the initiative.