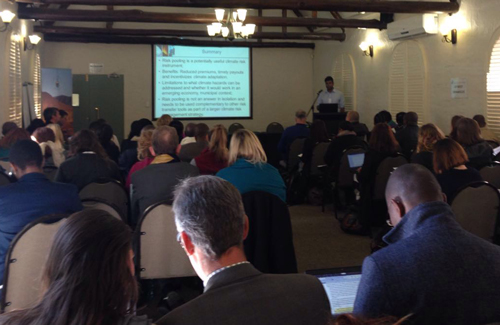 By Candice Arendse and Felix Donkor

In early July, the 2016 Southern Africa Adaptation Colloquium entitled Solution Space and Futures, Learning Together in a Climate Challenged World was held by the University of Witwatersrand. The colloquium was organised by the Global Change and Sustainability Research Institute (GCSRI) of the University of the Witwatersrand (Wits) in collaboration with African Climate and Development Initiative (ACDI) and Adaptation Network.  It brought together stakeholders from academia, the research community, non-governmental organisations, and government to engage on topics related to adaptation research, practice and policy.

The 2016 colloquium built on the 2013 Southern African Adaptation Colloquium which addressed key issues relating to adaptation, such as the growing vulnerabilities caused by climate change impacts, the need for interdisciplinary action and processes, and the inadequacy of communication between researchers and practitioners.  This year’s colloquium used three thematic areas: Knowledge co-production and learning; Solutions spaces and visioning the future; and Transforming adaptation.

The colloquium was very engaging and provided a platform for stakeholders from different sectors to exchange knowledge and insights into the complex process of adaptation. The presentations gave an excellent overview of the current state of adaptation policy, finances and projects in southern Africa, as well as a glimpse of what is to come for the future of adaptation. The work and viewpoints of government, practitioners, academia, and youth were well presented within a process that facilitated engagement across sectors.

Barend Erasmus of Wits opened the event, saying that platforms such as the colloquium are vital in building and strengthening the adaptation community. Heila Lotz-Sisitka of the Environmental Learning Centre at Rhodes University gave the opening keynote address, an in-depth presentation on expansive social learning and climate change adaptation.  She emphasised the need for social learning processes in adaptation that combine facts with values, social action and transformative agency, that are oriented to the collective transformation of human activity.   Both indigenous and scientific knowledge have vital contributions to make to successful social learning processes. Lotz‑Sisitka said that this process is complicated and should not be limited to community based projects and processes only, but rather acknowledged and practiced in the entire social learning system.

Image below: Participants at an Adaptation Network training workshop engaging in an activity that supports learning, 2015 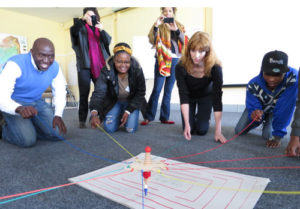 During the session, City adaptation: Lessons learnt and emerging challenges, the City of Cape Town was acknowledged for receiving the Adaptation Implementation Award at the Climate Action Awards in December. The City reduced water demand by 30 per cent in the past 15 years through tariffs and water saving devices in the Cape Town metropolitan area.

However, adaptation must be implemented in a way that is financially and socially just, and in this respect the City’s water demand management initiative is not considered entirely laudable, as Stephen Law of Environmental Monitoring Group explained. His organisation’s work with communities who are using water saving devices reveal that the initiative has been creating more problems than solutions, and those engaging in the initiative lack adequate support. He concluded that water saving devices seem to have increased vulnerability in some communities, leaving them financially frustrated and disempowered.

The concept of transformation was discussed as an important concept in climate change adaptation. Mark New of ACDI gave an overview of how transformation is defined in the academic literature. He distinguished between transformation and transformative, explaining that adaptation can act as a double edged sword; a tool for transformation and adaptation, and also for generating transformation. Participants broke into groups to discuss their understanding of the terms.  Key words emerging from the discussions included: increased resilience, facilitation, vulnerable groups, enable, education and awareness.

Image below: Homesteads like this one in rural Limpopo often have high vulnerability to climate change impacts 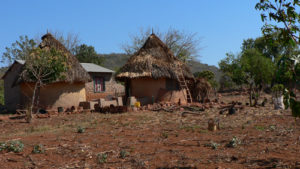 Rural livelihoods bear the brunt of climate impacts.  Fiona Paumgarten of GCSRI presented on the role of provisioning services as part of household response to vulnerability in the dry woodlands of Venda. Menelisi Falayi of Rhodes University presented on his work with rural communities to explore future scenarios for adaptation to current and future change, including climate change, using downscaled climate projections (2040-2050) and techniques such as pathways and visioning.  He said that because the magnitude and direction of social and environmental change are difficult to predict, tools like adaptive management, ecological resilience, and participatory scenario planning, sought to enable decision makers to capture the uncertainties and complexities of future social and environmental changes.

In a session on knowledge co-production, contributors highlighted the value of indigenous knowledge as a tool of adaptation, emphasising that they should not be judged by the standards of western science because they represent whole systems of knowledge that are valid but cannot be fairly appreciated in the context of conventional science.  A common concern is that rural communities often feel their knowledge is “harvested” by researchers without due credit. Sheona Shackleton of Rhodes University discussed some forms of knowledge co-production such as citizen science, indigenous knowledge, and traditional knowledge, saying that there is a need for cardinal research ethics to steer knowledge co-production to ensure transparency and respect for community shared values.

In closing the colloquium, Barend Erasmus suggested that the next wave of innovation has to be social innovation. This is only possible, he said, when a critical mass of society takes the initiative, and practice then spreads to the rest of the community to become a social phenomenon.  Erasmus encouraged participants to be proactive in environmental issues.