By Observatório do Clima

India’s greenhouse gas emissions had a 29 per cent increase from 2007 to 2012. The data come from GHG Platform India, the first independent emissions estimate for the Asian country, launched today in New Delhi by a coalition of six civil society organisations.

The platform, whose data are publicly available, is based on a greenhouse gas emissions estimate system (SEEG – Sistema de Estimativa de Emissão de Gases de Efeito Estufa) created by the Brazilian Climate Observatory (Observatório do Clima), which has been producing yearly estimates of Brazilian emissions since 2013.  The system was also launched for Peru last year.

Image below: GHG Platform India is able to provide a more recent emissions estimate than the Indian government 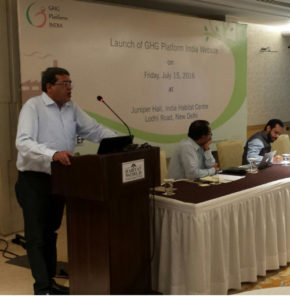 “The launch of the platform is a significant step towards increasing transparency and public information availability in a country which, despite its very low per capita emissions, is the fourth biggest emitter in the world”, said Tasso Azevedo, head of SEEG Global, at the launch.

According to the new data, emissions in India rose from 1,931 billion tons of carbon dioxide equivalent in 2007 to 2,490 billion tons in 2012. The latest official data, submitted to the United Nations in India’s Biennial Update Report (BUR), refer to 2010. There is a 2 per cent difference between the data from the civil society platform and India’s BUR for that year.

Unsurprisingly, the largest growth (33.8 per cent) was seen in the energy sector, chiefly due to coal burning for electricity generation. Within this sector, transport emissions have grown by 40 per cent to 230 million tons, but this is still small compared to public electricity generation (916.3 million tons – a 36 per cent growth). On the other hand, agriculture emissions remained stable, and carbon sequestration from planted forests is calculated to be higher than emissions from deforestation.

The data also imply that the Indian economy’s energy intensity has increased, although at a slower rate. In its commitments under the climate convention, the country pledged to reduce the emissions intensity of its GDP by 33 to 35 per cent by 2030 compared to 2005. According to Srinivas Krishnaswamy of the Vashudha Foundation and one of the organisers of  the platform, that growth does not mean that India is not on track to meeting its commitments: “We have seen a big push on solar energy over the last year and a half, along with many other programs in the energy efficiency space, which will possibly reflect in the emissions estimates for the years 2013-2014-2015.”

Image below: Participants at the launch of GHG Platform India

“We are in an era where we have to dig deep into different sectors for mitigating our carbon emissions and this database is an essential first step, for us to get an understanding of emissions by sector in detail, particularly, the sub-sector information”, he says. “I am happy that, such an initiative by civil society groups to make available sector specific emission estimates at a more granular level, for a time series of years, is made available for easy access.”

GHG Platform India is a partnership between the Council on Energy, Environment and Water (CEEW), the Center for Study of Science, Technology and Policy (STEP), ICLEI – Local Governments for Sustainability, Shakti – Sustainable Energy Foundation, the Vashudha Foundation, and the World Resources Institute, in collaboration with SEEG.

For more information on the SEEG emissions estimate system