When Leonardo DiCaprio accepted his Oscar award earlier this year in front of over 30 million live viewers, he used his speech to advocate for climate change, urging humanity to “work collectively and stop procrastinating”.  Although he is a long term supporter of work to address climate change, his Oscar speech directly brought about a record number of Tweets and Google searches, showing that celebrities and high profile individuals speaking out at significant  moments, can have a high influence on public engagement with the issue.

Researchers at the San Diego State University Graduate School of Public Health analysed news reports, Tweets and Google searches related to climate change over a roughly six year period.  On the day of DiCaprio’s speech, social media engagement was three times greater than that related to the Paris climate change conference.  There were more than 250,000 unique Tweets, and Google searches increased by 261 per cent for “climate change” and 210 per cent for “global warming”.  There was also an increase in searches related to specific excerpts of the speech, such as “hottest year”. The researchers suggest that high profile figures who speak about the issue in future could also endorse specific courses of action.

During the Cold War, a US military base called Camp Century was built within the Greenland ice sheet, 200 kilometres from the coast. It housed up to 200 soldiers and was powered by a nuclear reactor.  Its official purpose was to test construction techniques in the Arctic and conduct scientific research, but it was also used to test the deployment of nuclear missiles.  A larger camp was planned but not built which would have been capable of deploying up to 600 nuclear missiles.

Camp Century was decommissioned in the late 1960’s and abandoned, with the assumption that it would be covered by the expected perpetual snowfall.  Waste at the site is estimated to cover an area of about 55 hectares, and includes 200,000 litres of diesel, 240,000 litres of waste water, polychlorinated biphenyls, and low level radioactive coolant from the nuclear generator.

New research, published in Geophysical Research Letters shows that the ice sheet covering the abandoned camp could start to melt by the end of the century.  This would mean that any remaining biological, chemical and radioactive waste could enter into the environment and be transported into ocean. Responsibility for preventing contamination is not clear.  Although the camp was a US base, it is on Danish soil, and further, Greenland is now self-governing.  The camp was built with Denmark’s approval but the missile launch programme was kept secret from the Danish government.

A new process has been developed to convert natural gas to aromatic chemicals, which are used for materials such as plastics, textiles and liquid fuels. Current gas to liquid conversion processes are associated with high levels of air pollution, including greenhouse gas emissions.  The new process uses a ceramic membrane, made with materials such as barium, zirconium, nickel and copper to make liquid hydrocarbons directly from methane in one step by simultaneously removing hydrogen and injecting oxygen. It is claimed to be simpler and cheaper than currently used methods, and also avoid carbon dioxide emissions. The process was developed by CoorsTek Membrane Sciences, University of Oslo and Instituto de Tecnología Quírmica.

Although there are general indications of how mountain systems will respond to climate change, models are for the most part unable to provide detailed projections for specific systems. Researchers from the ETH Zurich and Utrecht University set out to provide greatly enhanced and more reliable projections for the Andes and Himalaya mountain ranges, which have previously not been modelled precisely. The study focused on the Juncal region of the Chilean central Andes and the upper Langtang valley of the Nepalese Himalayas. Image below: The Nepalese Himalayas (Image: Navin Singh Khadka) 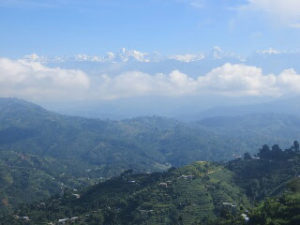 The Juncal and Langtang areas are important water catchments for lowland populations, both with glaciers and peaks higher than 6,000 metres. Both are projected to experience similar temperature rise, but with different development of their water balances. While Juncal is projected to become drier with a decline in available water from 2030, Langtang shows an increase in water discharge by as much as 70 per cent in some scenarios, stabilising at around mid-century. Glaciers in both areas will shrink, but because many Langtang glaciers are at higher altitudes, when they melt at some point in the future, their meltwater will sustain the flow that will be lost from glaciers at lower altitude. Langtang may also experience higher rainfall with resultant higher glacial melt. In addition, in Chile summer droughts are projected to worsen.

The researchers say their new model is unique because of its ability to illustrate different processes, taking into account factors such as rain and snow volume, evaporation, groundwater, and glacial expansion. The more precise projections are important for adaptation decisions, for example water saving and storage in Chile and flood management in Nepal. The study is published in Proceedings of the National Academy of Sciences.

Over the past decade, search and rescue operations in the Nunavut territories in northern Canada have more than doubled. A new study intended to improve understanding of the impact of climate change on Inuit communities shows a link between environmental conditions and search and rescue operations.  Information on fuel sales was used to identify days when people may have used vehicles (boats, snowmobiles, all terrain vehicles), and cross referenced with weather data and data from Canada’s National Search and Rescue Secretariat.  It was shown that risk was highest on warm days (around -3 degrees Celsius).  The study is published in Public Health.

Sea level rise is caused by both water expansion as a result of ocean warming and melting of glaciers and ice sheets that drain into the ocean.  The rate of increase of warming and melting has accelerated in recent decades, but the rate of sea level rise since 1993 has remained fairly steady. In short, the acceleration of the rate of sea level rise that was expected as a result of climate change was not observed.  The reason for this was revealed by a study by the National Centre for Atmospheric Research which shows that conditions created by the 1991 eruption of the Philippines’ Mount Pinatubo masked the effect of climate change on sea level rise.

The Pinatubo eruption caused a temporary cooling of the planet, which caused sea levels to drop by about 6mm.  Satellite records of sea level rise began shortly after the eruption.  As the cooling effects of the volcanic particles disappeared, sea levels rebounded to pre-eruption levels, which made the rate of sea level rise seem higher in the mid to late 1990’s than it would have been otherwise. When the effects of the eruption are removed in simulations, sea level rise is shown to accelerate as projected by climate models. The research was published in Nature Scientific Reports.

This week the Intergovernmental Panel on Climate Change (IPCC) held a scoping meeting for the special report on the impacts of warming of 1.5 degrees Celsius.  The organisation was invited to prepare the report by the United Nations Framework Convention on Climate Change at the last conference in December.  In April the IPCC issued a call for experts to be nominated, and selected expert will participate in the meeting, along with members of the IPCC Bureau. The report is referred to as : Special Report on the Impacts of Global Warming of 1.5°C above Pre-Industrial Levels and Related Global Greenhouse Gas Emission Pathways in the Context of Strengthening the Global Response to the Threat of Climate Change, Sustainable Development and Efforts to Eradicate Poverty (SR1.5). The intention is to finalise it before the end of 2018. Image below: Regional breakdown of the experts selected to work
on the Special Report on 1.5 degrees Celsius (Intergovernmental Panel on Climate Change) 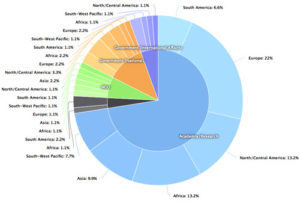 More information on the report is available here