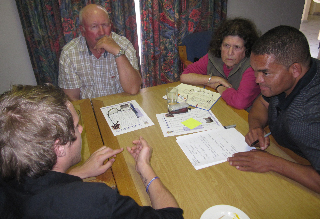 By Rehana Dada, based on Ziervogel, Archer van Garderen and Price (2016)

Image below: Knowledge-sharing workshops enabled stakeholders such as local and provincial government officials to put information on the table that the researchers would not otherwise have been able to access 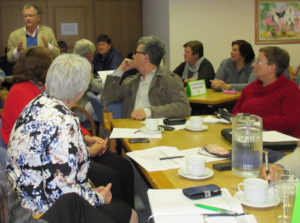 The paper argues that although the development and implementation of local adaptation plans need to be informed by climate science, it is also highly important to factor in managerial, political and local knowledge: “In order to align adaptation plans with development priorities and gain buy-in from a broad actor base, the integration of multiple knowledge forms, including climate science, managerial-political and local knowledge should be prioritised. This could be strengthened if co-production [of knowledge] is given greater priority”.

Ziervogel, Archer van Garderen and Price were key roleplayers in the development of an adaptation strategy for Western Cape’s Bergrivier Municipality, which relied on the involvement of provincial and municipal officials and councillors, researchers, farmers, conservation officers, tourism operators, the private sector, and Bergrivier residents.

A number of different opportunities merged that enabled the strategy to be developed using an innovative multi-stakeholder process.

With regards to policy, work at national and provincial level was catalytic.  South Africa’s National Climate Change Response Policy was released in 2011, and this motivated the Western Cape to review its provincial climate change strategy of 2008 to align with the national policy. The updated provincial strategy acknowledged the importance of mainstreaming and embedding climate change into local and district line functions such as Integrated Development Plans, Spatial Development Frameworks, and Disaster Management Plans.  Mainstreaming of climate change into existing developmental planning was supported by the Climate Change Municipal Support Programme (CCMSP) of the Climate Change Directorate of the Western Cape’s Department of Environmental Affairs and Development Planning. 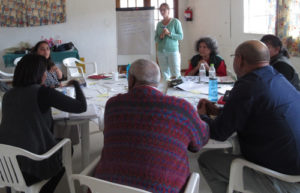 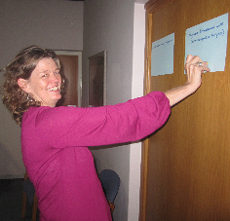 Another important synergy relates to financial resources. Just as the work in Bergrivier was starting, two of the research groups, Climate Systems Analysis Group of the University of Cape Town (UCT) and the Council for Scientific and Industrial Research received funds to support engagement with municipalities on climate change adaptation.  Later in the process, the African Climate and Development Initiative of UCT, also joined the process, and helped to facilitate regular meetings between some of the key roleplayers.

Throughout the process of developing BCAP, opportunities were exploited to co-produce knowledge.  Three workshops were held, attended by 25 to 30 people, with the workshop methodology designed collectively by the researchers and local and provincial officials. All were participatory, with some formal presentations, group interaction and discussion.

Ziervogel et al (2016) write: “The workshops focused on bi-directional learning between participants and facilitators, which sparked interest in the relevance of climate variability and change to the participants. It was stressed throughout the initial engagements that the CCMSP was not designed as a one-off engagement on the part of the Western Cape Government, but rather an investment in longer-term partnerships towards the realization of local municipalities’ optimal response to climate change. The process focused on capacitating a broad stakeholder group to understand that many of their day-to-day activities are currently exposed to climate risk and reducing this risk is what adaptation to climate change is about.”

The paper builds on an understanding that scientific, managerial-political and local knowledge are the dominant forms of knowledge in sustainable resource management: “Knowledge is generated through a larger social process. This relational knowledge-building is particularly important for transdisciplinary research and contributing to the knowledge–policy interface. In the case of the development of the Bergrivier Climate Adaptation Plan, all three knowledge forms were drawn on and negotiated for joint purposes to inform policy.”

“What was important in our case is that development of the plan was not driven by centralized policy. Rather, it was informed by scientific knowledge as well as local knowledge and priorities. Due to local government and provincial leadership, the policy aligned with the managerial–political knowledge of the provincial and national priorities. The strong social relations of the provincial initiator with the researchers led to the inclusion of scientific knowledge, but this knowledge was not considered privileged knowledge, as is often the case. The climate scientists and adaptation researchers informed the process of assessing vulnerability and climate impacts and made presentations on these at the workshop.”

Image below: Students of the University of Cape Town on the banks of the Berg River, learning about how water is abstracted and treated before being piped to towns Ziervogel et al (2016) explain that the development of adaptation plans and policies needs understanding of climate science and vulnerabilities as well as the broader socio-economic and governance contexts in which adaptation might occur.  Researchers may understand the science, but not necessarily the governance and socio-economic context.  On the same line, local government decision makers understand the governance and socio-economic context but not necessarily the science.  They suggest that scientific knowledge should be placed alongside local and managerial-political knowledge, and that the importance of all these forms of knowledge for informing policy is recognised.

BCAP was produced within a relatively short period of time on limited resources. Possibly because of its small budget, it was less prone to co-option by political parties, and this also provided for increased flexibility and responsiveness.  Most importantly, the small amounts of support from multiple partners meant that no consultants were contracted, and this resulted in the municipality owning the process and remaining involved in its evolution: “It made a significant difference that the local government co-led the development of an adaptation plan, even if external researchers and government officials at different levels supported the process.”

The involvement of a range of representatives from different sectors and levels of government was important for building institutional capacity for adaptation and winning support for climate policy.  This laid a strong foundation for implementation.

The paper is titled Strengthening the knowledge-policy interface through co-production of a climate adaptation plan: leveraging opportunities in Bergrivier Municipality, South Africa and it is published in Environment and Urbanization, July 2016.