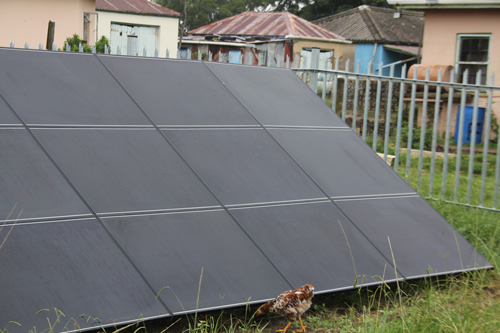 By Neoka Naidoo with Rehana Dada

The African Renewable Energy Initiative (AREI) has been described as “too big to fail”, echoing the sentiments of the 1912 headlines of the Titanic’s maiden and only voyage: “The Unsinkable Titanic”…and that didn’t go to plan. As progress is made in achieving the objectives of AREI, there are some looming icebergs that we should be taking action to avert, not least issues around ownership of the initiative, management of the funds it attracts, and aiding an inclusive and transparent process.

The AREI concept was launched by the African Group of Negotiators (AGN) at the end of 2014.  It proposes implementing 10 GW of renewable energy in African countries by 2020, and 300 GW by 2030. To achieve this, it suggests the use of smart grids that combine restored current grid systems and various forms of energy production, coupled with energy efficiency.

“It is up to countries to decide internally what their renewable energy needs are and how they intend to meet those needs, we are not being prescriptive, we are just providing guidelines, and we are open,” explains Seyni Nafo, chair of the AGN and a key architect of the initiative.  He says: “This is an African initiative, and through this and the Africa Adaptation Initiative, we are setting our own agenda and inviting funders to become a part of African owned projects”.

Image below: Tower of the Xhi One Concentrated Solar Power plant. The halo above is reflected light.
Image source: Jeeten Morar

Without access to decisions and documents, civil society continues to speculate. The limited transparency raises concern about process. There are also concerns about AfDB’s suitability for a big role in AREI; for one, the bank’s international financial mechanisms need to be strengthened when compared to those presented in the International Renewable Energy Agency’s (IRENA) Financial Mechanisms and Investment Frameworks for Renewables in Developing Countries (2012).

Questions were also raised about whether the USD 10 billion pledge is additional financing or merely re-allocated overseas development assistance (ODA). To date there is no clarity – there are conflicting opinions, and no concrete or accessible documentation. Nafo concurs, saying: “There are still a number of matters that are still to be settled… we will have to see….”

At the May meeting, a joint statement prepared by members of African civil society was presented to the AMCEN secretariat to share with the Ministers of the member states.  It detailed how African civil society sees AREI being operationalised, with our main message highlighting the importance of a good foundation for AREI and its role in sustainable provision of, and access to, energy, whilst keeping the safeguards at the forefront. If projects under AREI are not African-owned, we are left open to the initiative being scooped up by non-African countries, which externalises ownership – and possibly the benefits – while still internalising the risk.

Image below: The Xhi One Concentrated Solar Power plant near Upington, Northern Cape. The heliostats reflect sun onto the tower (picture above) which uses the energy to heat steam which turns a turbine to generate energy.

We also caution that implementation of AREI must not compromise other developmental needs. Certain countries already have better capacity and infrastructure; for example, Morocco, Kenya, Egypt and South Africa would be the easiest countries in which to implement the short term target while the AREI structure is being operationalised. But implementing the first 10 GW by 2020 in these countries could set a precedent that could jeopardise the energy access aspect of the 300 GW by 2030, bearing in mind that improved access to energy is a core AREI objective. Improving energy access is achievable when all bodies involved work responsibly to create meaningful change.

AGN holds the reigns, and intends to continue doing so because, as Nafo explains, it is the African negotiators who best understand what is needed from within the climate negotiations sphere, what resources are available, how to access those resources, and how to ensure that the resource flow strengthens and continues.

The best way to be constructive is to be introspective. Transparency throughout the process reduces speculation and ambiguity.   Trying to plan and implement a continental program is difficult, and adding in a resource that is coupled with development makes it less clear cut. Africa’s environmental ministers and lead negotiators therefore have a difficult task in implementing AREI – and there are even more unanswered questions that could lead to more contention.

A piece of research undertaken by the Egyptian Centre for Economic and Social Rights models seven different energy pathways for the next 20 years that address social and environmental externalities leading to inclusive development. Studies like this visualise what is intended by AREI, and have the ability to inform the commitments that countries make under the Paris Agreement**. An effective solution does not have to be exclusive, and the best solution is likely to be a combination of options that already exist.

There is ample concrete science proving that renewables need to rapidly infiltrate the energy space. It is imperative that critical analyses are present throughout the process to ensure that the business as usual approach does not fester. It is crucial for AREI to use real numbers and a pathway of possible and realistic implementation. We criticise to try to plug the gaps in its implementation, and not to stop the initiative. We need to miss that iceberg, and stop pretending that the seas ahead are clear.

Neoka Naidoo is a policy and research communicator at Project 90 by 2030.

* France hosted the Twenty-first Session of the Conference of the Parties of the United Nations Convention on Climate Change (UNFCCC COP21) in Paris in December 2015.

** The commitments made under the Paris Agreement are called Nationally Determined Contributions.

For more information on AREI: http://www.arei.org

To download a PDF of the research by the Egyptian Centre for Economic and Social Rights: http://ecesr.org/wp-content/uploads/2016/03/80-Gigawatts-of-Change-En-Pages.pdf

To download the IRENA document, Financial Mechanisms and Investment Frameworks for Renewables in Developing Countries: http://irena.org/Finance_RE_Developing_Countries.pdf