At the end of March, the Department of Environmental Affairs (DEA) hosted the Technical Working Group on Adaptation and the Inception Workshop for the National Adaptation Strategy. Three key processes were discussed, firstly provincial adaptation strategies, secondly the adaptation chapter in South Africa’s Third National Communication to the UNFCCC, and finally the National Adaptation Strategy that is in development. A fourth key presentation was about the development of Desired Adaptation Outcomes, and updates were provided on adaptation in the Paris Agreement, adaptation in cities and local government, and the National Framework for Climate Services. Tlou Ramaru of DEA acted as programme coordinator for both days.

Vhali Khavaghali of DEA opened discussions at the Technical Working Group on Adaptation saying that “the adaptation family is growing” and he would like to see an even bigger and more interactive family. The three pillars of adaptation identified by DEA are: 1. Reduce vulnerability; 2. Improve resilience; and 3. Improve adaptive capacity.  Its focus areas are climate change science (impacts, vulnerabilities, risks and adaptation measures), policy planning and governance, international adaptation, climate services (e.g. drought and extreme events), and a community of practice (implementation, awareness, advocacy and capacity building).

Khavaghali explained that work is underway to develop the South African response to climate change impacts: “This is a planning issue more than a reactive issue”. He called for participation in the process from sectors that have not traditionally been involved in climate change, such as public works and education, because of their potential role to drive adaptation processes and support adaptation needs.  He drew attention to the Paris decision to include adaptation in the global stocktake, and said that it is important to provide an overarching adaptation goal for South Africa. 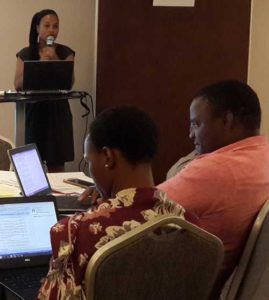 Funanani Muremo of DEA’s climate change international directorate provided an overview of how adaptation is addressed in the Paris Agreement. For a start, the Agreement established a global goal on adaptation, and acknowledges loss and damage as a separate mechanism from adaptation. Muremo said there are four thematic areas in the United Nations Framework Convention on Climate Change: the Adaptation Committee, which revised its workplan based on the COP21 outcomes; National Adaptation Plans (NAPs), for which there are discussions underway regarding the review process; the Warsaw Mechanism for Loss and Damage (WIM), which now serves the Paris Agreement; and the Nairobi Work Programme, which focuses on the collection and analysis of data and knowledge to inform adaptation planning and actions.

Muremo said: “The period between now and 2020 is critical – as much as we agreed to the Paris Agreement, we didn’t agree to rules, procedures and modalities on how to implement the Agreement…..and that’s what will be negotiated in the next 5 years”. South Africa is now required to implement its Intended Nationally Determined Contributions (INDC) and communicate a new Nationally Determined Contribution (NDC) every five years, as well as submit adaptation communications periodically.

Alinah Mthembu and Sibonelo Mbanjwa of DEA’s climate change adaptation natural resources sector introduced the process being followed for developing the National Adaptation Strategy (NAS), which uses the UNFCCC guidelines for National Adaptation Plans (NAP). The NAS will be submitted to the UNFCCC as South Africa’s NAP.

They explained that the objectives of the NAS are:
• To reduce vulnerability to the impacts of climate, by building adaptive capacity and resilience;
• To facilitate the integration of climate change adaptation, in a coherent manner, into relevant new and
strategies, within all relevant sectors and at different levels; and
• To optimise policy coherence within sectors and across sectors in order to achieve adaptation outcomes
that support development aspirations. 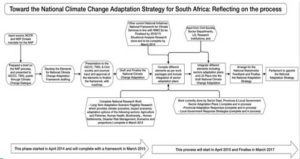 Currently, the elements of the strategy are being compiled, with literature review conducted to take stock of the adaptation options and actions that are already in place.  Mthembu said: “We are taking cognisance that there is work that is already existing, so this strategy will be based on the work that is already being done”.  Tlou Ramaru explained: “We want a strategy that is implementable.  This is a national process and we will take input from the provincial processes, but we will clarify those processes as we go along”.

The literature review will be followed by three months of consultation with all stakeholders, government departments and the private sector with the idea of developing a strategy that reflects the needs of the country. Mbanjwa emphasised that this strategy would be a collective national strategy, not a DEA strategy: “Despite the fact that we talk at a sectorial level, mandates are sitting in different departments, and so it’s key to have as a critical element good working relationships across departments. Right now we are at a stage where we are saying the full scale work in terms of developing the NAS is happening.  We have appointed service providers, and different elements of work are happening.” The deadline for the NAS is March 2017.

Tsepang Makholela of the DEA’s Monitoring and Evaluation team introduced the work to develop Desired Adaptation Outcomes (DAO), which are intended to “inform and focus the monitoring and evaluation of progress towards a climate resilient South African society”.  They were developed from sector specific adaptation priorities that are described in the National Climate Change Response Paper. 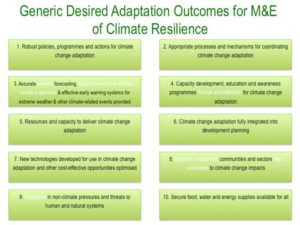 Makholela explained that in the first phase, consultations are being held with sectors, provinces, business and NGOs to fine tune the DAO so that they are specific for the different sectors of society.  Roundtables will be held, in order to identify information needed to develop the DAO, identify gaps in existing information, and formalise sharing of data and information.

Two roundtable discussions were held in March for the water sector, which included the Department of Water and Sanitation, institutions such as the Water Research Commission and Council for Scientific and Industrial Research, academia such as the University of KwaZulu-Natal, Departments of Agriculture, Forestry and Fisheries and Science and Technology, and independent consultants.

In the second phase of the process, Makholela said, there would be more focused analysis.  Some stakeholder consultations for the DAO will be held alongside those planned for the NAS.

Image below: participants at the workshop 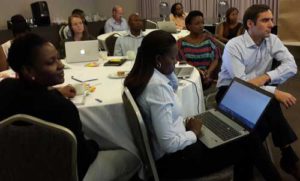 A number of adaptation relevant processes will be held in the near future, and we will report further in the next newsletter.