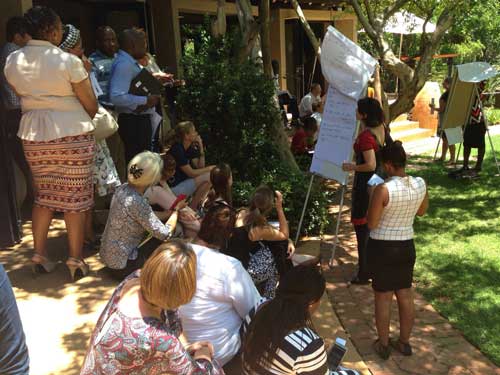 Ecosystem services contribute greatly to socio economic and environmental wellbeing, providing benefits such as reliable supplies of potable water, clean and oxygenated air, grazing for livestock, and fertile soils for producing the food that we eat.  However, the impacts of climate change coupled with direct human interference on natural systems threaten the ability of ecosystems to provide important services, and thus increase our vulnerability to climate change. With this in mind, it has become critical for governments to plan for  Ecosystem-based Adaptation (EbA), in order to maintain ecosystem benefits such as the regulation of water quality and quantity, and decreasing the effects of extreme weather events.

South Africa has identified the biodiversity sector as one of the priorities of climate change adaptation planning in its National Climate Change Response strategy. The country has therefore developed Climate Change Adaptation Plans for nine South African biomes, a process that was led by the Department of Environmental Affairs (DEA). The Plans include components that focus on the development of an EbA Framework and Implementation Plan for the country.

DEA, in collaboration with the South African National Biodiversity Institute (SANBI) hosted a one day stakeholder workshop on 11 February 2016 at the Pretoria Botanical Gardens, with the intention of developing a Strategic Framework and Implementation Plan for EbA in South Africa. More than 40 participants attended the workshop, including representatives from local and national government and institutes such as the University of Witwatersrand, Water Research Commission, and WWF.

The greater part of the workshop was spent on group work to refine and deepen the framework.  The process focussed on five components that addressed critical aspects of the new EbA plan:

Each working group focussed on ideas and recommendations for the development of each component, based on participants’ practical experience and working knowledge.  The working groups created a platform that enabled expression of diverse views and logical engagement, with input made in a rotation form whereby groups of participants were able to give input into each of the components.

Sarshen Scorgie of Conservation South Africa noted that although all of the components discussed during the workshop were important, it is vital to focus on demonstrating EbA in the development of a framework, and therefore the focus should be on the second component. This working group discussed options for pilots including integrating hard infrastructure and considering all of South Africa’s biomes, climatic spectrums and sectors. Disaster risk reduction options were also discussed. Scorgie said that a cost benefit analysis of the pilots will enable planners to identify which areas of the EbA should be scaled up or replicated.

A draft of the Framework that was developed from the inputs obtained during the workshop is due to be circulated for comment during March. Stakeholders will kept up to date on the progress of the plan.