Director of the African Climate and Development Initiative, Mark New, presents his reflections on COP21 in a video. He says that the COP21 agreement shows new ambitions in responding to climate change, especially for developing countries, but there are still major ambition gaps. In the video he comments on what COP21 means for developing states and particularly South Africa, as well as on the ambition gaps that will require greater focus in order to be adequately closed.

The video is available here

Climate Finance Advisory Service (CFAS) reports that the 12th Green Climate Fund (GCF) board meeting, which was held in Songdo last week, focused on “addressing and closing” policy gaps. The GCF intends to distribute USD 2,5 billion by the end of this year, following its first approvals of proposals last November. The USA reported that the first USD 500 million tranche of their USD 3 billion pledge has been signed. A Budget Committee was established whose role is to review and make recommendations to the board on administration of the budget. Its first task was to develop options for an increase in staffing, with a decision taken at the end of the meeting to increase staffing to 100 positions by the end of 2016 and 140 by the end of 2017. The administrative budget will increase to USD 35,8 million. Another key matter for discussion at this meeting was the appointment of a new executive director to take position from September.

Crédit Agricole HSBC received accreditation despite a concerted opposition campaign by international organisations. CFAS reports that “several board members referenced the criticism civil society groups had raised” regarding accreditation of Crédit Agricole and HSBC, with particular concerns regarding HSBC’s compliance with anti money laundering standards. Some board members considered that through engaging with large financial institutions, the GCF “could reinforce a shift in their portfolio towards compatibility with the Fund’s objectives”.

A Strategic Plan for the GCF was adopted, and the Secretariat was requested to implement it. Some board members stressed the importance of addressing additional issues raised during discussion, and that the plan should be considered a living document that can be revised.

The Department of Environmental Affairs is holding an inception workshop for the National Adaptation Strategy on 31 March 2016. The intention of the workshop is to provide an overview of the process and time lines, and discuss the framing of the national, provincial and local government and cities processes. The meeting will be held in Gauteng, venue to be confirmed. The Technical Working Group on Adaptation will meet the day before (30 March 2016), also in Gauteng. The workshop is an opportunity for all interested parties to provide their input into the process. The National Adaptation Strategy acts as a National Adaptation Plan in the context of reporting to the United Nations Framework Convention on Climate Change.

International call for justice for the murder of Honduran environmental activist

On March 3rd, Honduran environmental activist, Berta Cáceres, was assassinated in her home town. She had been repeatedly threatened for her opposition to the Agua Zarca Dam on the Gualcarque river. The dam is expected to significantly reduce local communities’ access to food and water. Cáceres was coordinator of the National Council of Popular and Indigenous Organisations of Honduras, and the 2015 recipient of the Goldman Environmental Prize. Organisations around the world have called for justice on her behalf, including World Rainforest Movement, Friends of the Earth and Climate Action Network. World Rainforest Movement has also called for the protection of Gustavo Castro who was wounded at the time of Cáceres‘s murder and is now being detained by Honduran authorities.

Image below: Berta Cáceres, at an action with the communities she worked for. Image: Courtesy of the Goldman Environmental Prize 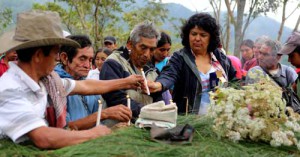 Research by the University of Massachusetts, Pennsylvania State University and GNS Science, New Zealand, show that large changes in the Antarctic ice sheet are possible at even lower levels of atmospheric carbon dioxide than previously thought. The researchers say that this does not imply an immediate rise in sea levels, but it does show that the Antarctic ice sheet is more vulnerable than models have previously shown. The models used in this research include three new strategies that improve simulation, in particular a component that better captures feedbacks between the ice sheet and climate. The results were obtained from reconstruction of how Antarctica’s ice sheets responded during the mid Miocene, when atmospheric carbon dioxide levels were the same as that expected in about 30 years from now, as well as sediment core findings. The results are published in two companion papers in the Proceedings of the National Academy of Sciences.

A study published in The Lancet shows that changes in diets and bodyweight as a result of reduced crop productivity could result in over half a million additional deaths in 2050. The results are based on modelling conducted by the Oxford Martin Programme on the Future of Food at the University of Oxford. Low and middle income countries are likely to be worst affected, particularly countries in the Western Pacific and Southeast Asia, with almost three quarters of climate related deaths expected to occur in China and India. Greece and Italy are also significantly affected on a per capita basis. The problem is not only reduced food availability, but also a change in the type of food that is available; for example reduced availability of fruits and vegetables can increase incidences of heart disease, stroke and cancer. The researchers say that cutting emissions could reduce the number of climate related deaths by between 29 and 71 per cent, depending on the effectiveness of mitigation. The authors say that adaptation efforts are needed that involve public health programmes aimed at preventing and treating diet and weight related risk factors such as increasing fruit and vegetable consumption.