Depending on the perspective taken, the Paris Agreement is either a phenomenal success or the worst possible sentence for our descendants.  From the perspective of the children who are to be born in the next decades, Paris might be seen as an utter failure, in that it did not set a roadmap for achieving emissions reductions or transfer of finance, technology and capacity building to the countries who need support.  From the perspective of those who have worked in the negotiations, endlessly seeking out the little tendrils of agreement and cooperation, that we have agreement after four years of anguishing in the very many critical differences, is an extraordinary achievement.

The COP itself was a strange place. The physical space was extensive, with the halls being mainly (very effectively) transformed aeroplane hangars.  Observers were not allowed in the negotiations rooms following a developed country request, which mean that the many developing country teams that rely on expertise from the non governmental sector were unable to tap into that expertise easily.  Many of the proposed side events  were joined together, ostensibly because of the large demand for side events slots and inadequate space. This resulted in some events lacking coherence, in that often panellists were presenting non-cohesive views and information.  The side events at the various pavilions were more focused, but not many non-governmental organisations have the resources needed to set up pavilions. Media access to the negotiations was limited, as always, and although the French presidency maintained excellent contact with the negotiations team, media engagement from most parties was less forthcoming than it could have been.

The strange rumours of a high ambition coalition, which drew massive media attention for several days, may or may not have been based on truth.  However, the coalition did not present text, issue any joint statements, or negotiate as a block, and seemed to exist only as a public relations exercise.  In particular, the US speech on Wednesday seemed intended to instigate a form of pressure that showed the developed world as highly ambitious when, in reality, it has not committed to the mitigation ambition, or adequate transfer of finance and support to ensure a just transition.  Without finance and support for the developing world, restricting emissions to a 1.5 degree warming limit means stifling their economies and developmental objectives. 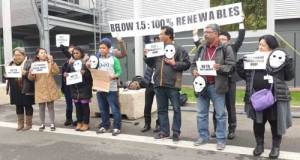 Image above:Activists kept up pressure throughout the conference for parties to commit to high ambition

As a broad framework, the Paris Agreement has many wins for developing countries.  The mention of 1.5 degrees Celsius as a global limit is an advance on the previous focus on 2 degrees, and the request to the IPCC for a special report on the matter, although potentially a delaying tactic, does allow for a more sound argument to support the shift.  Human rights and Mother Earth is mentioned in the preamble, although many were disappointed that it was not included in the body of the agreement.

That Loss and Damage was maintained in a separate article from Adaptation was also an important win for Africa. However, a clause in the decision text excludes countries from holding others liable for loss and damage or claiming compensation.  It will be interesting to watch how this plays out in the future, especially in light of the high interest and growing support for climate change tribunals.

Finance in the text is weak and there was some backsliding.  But the text established flow from developed to developing nations, and did away with the obligations on all.

We did ok to get agreement for nearly 200 countries trying to develop what is effectively a global energy governance system.  But we do need more than principles and frameworks, and although there is some evidence that developed countries may meet their responsibilities even without being locked into firm commitments, the scope of finance and support is still just a smidgeon of what is needed, and the pledges must be delivered before they can be counted.  There is always hope – because we are humans –  that technologies will advance, that systems will shift dramatically, that our patterns as a species will evolve to become more respectful of our life support system and those we share it with.  However, because we work to rules and work plans more effectively than to broad guidelines, Paris is only the start of a period of intense work to develop and meet clearly defined objectives.

Comments in this piece are provided from a number of different people and organisations.  This is by no means a comprehensive analysis.