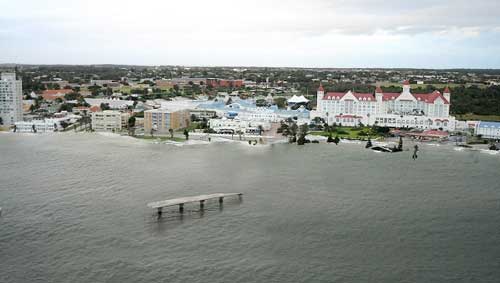 By Guy Rogers
If global temperature rises by 4 degrees Celsius, the impact of sea level rise on Nelson Mandela Bay could be catastrophic with the swollen waters of Algoa Bay swamping roads, highways, railway lines, port infrastructure and large parts of Deal Party and North End.

A graphic new report based on the latest climate change research shows how the sea could thrust into the Swartkops River pushing the polluted estuary into the residential areas of Kwazakhele and Soweto-on-Sea and, further upriver, inundating the industrial township of Perseverance. Expanded by heat, stalled mega-currents and melting glaciers, and prefigured by storm surges, it could crash over King’s Beach and across the prime land where the tank farm, ore terminal and new beachfront lifestyle development area are located. Further along Beach Road it could swell over Pollok Beach and the car park where the popular Something Good restaurant stands.

That’s just part of the prognosis for Nelson Mandela Bay captured in precise online visuals developed by the US-based organisation Climate Central. These visuals are based on research by the Proceedings of the National Academy of Sciences of the USA whose studies published late last year reveal that “unabated carbon emissions leading to 4 degrees Celsius warming could lock in 6.9m to 10.8m of long-term global sea level rise: “Such a rise would threaten to submerge land currently home to 470-760 million people on six continents over the coming centuries.”

Working with global figures, Climate Central factored in a suite of local factors including gradient and terrain, warming off-shore winds, currents and degree of continuing land subsidence after the rebound following glacial subsidence 10,000 years ago. The result has allowed them to produce interactive coastal maps to show what the affects will be for different emission levels, temperature rise and consequent sea level rise, wherever you are around the world.

The Weekend Post took a slow drive to get a feel for how the surreal new blue shading on our Climate Central Surging Seas map of Nelson Mandela Bay (see graphic below) translates on the ground.
Low-lying Talant Road with Algorax on the left and the Fishwater Flats Waste Water Treatment Plant on the right could be hardest hit, it seems, with the ocean ballooning right over Grahamstown and Trunk roads, the railway line and the flatland between and into Kwazakhele, through streets like Mcaphukiso, Mahambehlala, Kuzwayo, Madlingozi, Sodladla, Ngwendu and Ghandi. These streets are all lined with homes and businesses, and this week they were thronged with adults and kids commuting, trading, talking and playing. All this would be obliterated. 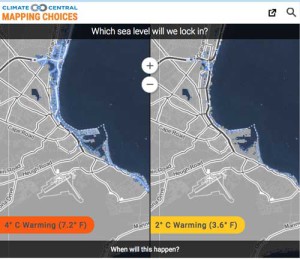 The blue also washes over important conduits like Daku and Dibanisa and up at Coega over the Ngqura port. Back towards Port Elizabeth the relatively empty coastline is largely unaffected with the sea level rise apparently mitigated by the wide sandy beach – tying in with analysis by Nelson Mandela Metropolitan University sandy beach ecologist Dr Linda Harris. The map shows that, as human structures appear again, the ocean starts invading the land.

A large part of Settler’s Freeway and Burman Road, the main thoroughfare through Deal Party, are covered, and much of Port Elizabeth Harbour is under water. What is key about the research findings is that “carbon pollution casts a long shadow, as Dr Ben Strauss of Climate Central explained: “It is expected to persist in the atmosphere long enough to prolong temperature increases for hundreds and thousands of years, long after we stop burning fossil fuels or clearing forests. It is not so easy to gauge when this level of sea rise will occur. It might be any time between 200 and 2,000 years from now, “although the faster end of the spectrum is more likely.” What is certain is that we are locked into it happening, he said.

Asked for his comment on the new maps, Nelson Mandela Bay Chamber of Business CEO Kevin Hustler said: “with the correct planning, we believe sufficient measures could be developed to alleviate extensive damage and loss to the economy.” There is no reason to panic but the Bay, business and ordinary citizens need to work together on this challenge, he said: “We need to establish clear scenarios and implement plans based on best practice developed around the world on how to jointly deal with this potential threat to the economy.

Metro spokesman Mthubanzi Mniki said the metro’s Coastal Management Plan (CMP), updated this year, ranks the risk of storm surges on the back of sea level rise as particularly important. To counter this, “the CMP recommends removal and relocation of some infrastructure…. and limiting development in certain zones to protect nourishment of beaches through sand migration.”

As part of the drive to bring down greenhouse gasses, the metro has developed an inventory of the worst polluters. On the other end of the scale over 100,000 households have been engaged through the metro’s Go Green programme to help them reduce their carbon footprints through a wide range of measures from recycling to planting spekboom and using electricity more efficiently, Mniki said.

Image above:Significant sections of coastline, both protected natural areas and areas with infrastructure, will be inundated

eThekwini Municipality sea level rise specialist Dr Andrew Mather, who has advised the Nelson Mandela Bay Metro on set -back lines, was critical of the lack of specific time frames in the Climate Central visuals. Set-back lines for sea level rise of up to 1m have been established for the bay and the key is that development must happen behind these lines, he said: “Ordinary citizens should make sure that they are aware of the risk lines on their coastline and raise these issues when developments are proposed in these zones to ensure that the risks are considered and, in the case of public money, their contributions via rates is spent sustainably.”

Dr Harris said storm surge on the back of rising sea level likely poses the biggest threat to the metro. In March 2007 8.5m waves struck the KwaZulu-Natal coast on the back of a temporary 1m sea rise caused by a cut-off low pressure storm and equinox spring tide, resulting in R8.5 billion damage. Studies of that event showed natural coastlines absorb storm impact best but this is the biggest problem in Port Elizabeth where historic development and invasive exotic vegetation has blocked the sand migration corridor which used to supply sand to the beaches in the bay, Harris said: “That means we have we have sand inundating infrastructure at Sardinia Bay and erosion at Hoby Beach. This has compromised our natural resilience to seal level rise inside the bay. This resilience has to now be artificially constructed and this is already being done with a mixture of cement sea walls and imitation sandbag dunes.”

Besides being fun for humans and key for resilience against sea level rise, beach sand helps clean seawater by filtering it and beaches are home to unique species, she said: “But if we decide we want to defend the beachfront amenities in a 4 degrees Celsius scenario, that would probably mean sacrificing our beaches and having the waves breaking against some kind of a wall: “Unless we can come up with a really creative engineering solution that would allow us to push against the sea and keep our beaches. The other alternative would be realignment and all the shore-lining structures would have to go.”

Human rights and climate change activist, Nelson Mandela Metropolitan University development studies researcher Professor Janet Cherry, said the South African government had to sharply increase its commitment to carbon emission cuts: “Our government has to have the guts to take a strong position with measures like carbon taxes, bigger investment in renewables, shifting away from coal-fired power. Many industries can and must embrace clean energy. The jobs will follow. It’s an opportunity.”