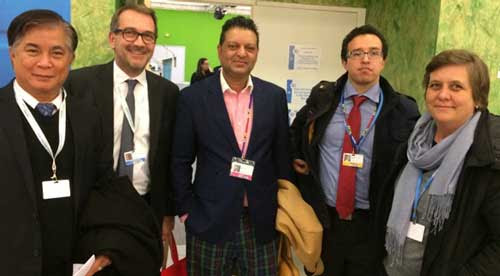 The Green Climate Fund (GCF) needs to be the “Captain Kirk” fund that will “go where no other fund has gone before”, says newly elected co-chair of the Green Climate Fund Board, Zaheer Fakir: “if we don’t take risks we are never going to learn”. He was speaking at a side event at COP21 on December 9th entitled “Looking beyond Paris”, sharing the panel with his co-chair Ewan McDonald, the outgoing co-chairs, and executive director of the GCF, Héla Cheikhrouhou.

The Paris conference was a milestone for the GCF. It had mobilised just over USD 10 billion in pledges in 2014, and geared up for delivery in 2015. Over 60 percent of the pledges were formalised through signed agreements by the end of the year, and eight funding decisions were approved by the Board at its meeting in Zambia last November. Fakir, who is from South Africa’s Department of Environmental Affairs, was elected along with co-chair Ewan McDonald of New Zealand and other new members of the 24-member Board at the Zambian meeting.

At the side event Cheikhrouhou reported that the Board had authorised operationalisation of the GCF Readiness Facility. Thus far 95 countries have expressed an interest in the programme, and more than 30 readiness grants have been agreed. A minimum of 50 per cent of readiness support is targeted at Least Developed Countries, Small Island Developing States, and African States. An online portal was established for the facility a year ago, and since then 29 countries have gone through the process and 70 entities have uploaded funding applications. There has been heavy focus on the direct access and private sector entities.

McDonald referred to the need to operate in terms of the risk appetite of the donors. Thus far USD 10 million has been approved for direct access pilots and a preparedness facility is being established. He said: “The projects already approved should serve to show us where we can improve. Operational modalities also need to be reviewed to assess whether we are getting transformative and innovative programmes.”

Fakir urged countries to take “real ownership” of the GCF and not limit their engagement to no-objection letters. He noted that “vision without action is a daydream, and the opposite is a nightmare”, saying that the Board will therefore ensure that relevant parties can have a clear understanding of how they can engage, including: