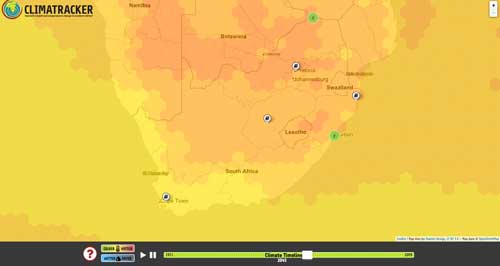 Will we have enough rainfall to sustain forests and agriculture? Will higher temperatures make some areas uninhabitable for animals and humans? Will today’s coastal towns be under water in future?
These are the type of questions scientists all over the world are trying to answer by predicting how local climates and the global climate will change over the next decades.

But climate modelling is a complex science. Carefully generated algorithms that try to consider all the variables are fed into powerful computers that calculate how climates might change. The variables that influence the climate include things like how cloud cover affects sunlight penetration, how air flows over mountain ranges and across oceans, how the sun heats up different parts of land and sea at different rates, and how much pollution is in the air over different parts of the world.

There are many different approaches to climate modelling – some models use historical data to extrapolate future conditions; others employ learning algorithms that essentially learn how different variables affect climate in order to model past and future conditions accurately. Some models are global, others try to zoom in on smaller regions.

But all climate models have one thing in common: they tell us that the future is bleak. The world is expected to warm by nearly three degrees Celsius by 2099, and Southern Africa will warm by nearly twice that global average, whether we are talking worst case or best case scenario.

ClimaTracker was built using climate modelling data generated by researchers at South Africa’s Council for Scientific and Industrial Research (CSIR). The data behind ClimaTracker is based on the worst-case emissions scenario, which scientists call “RCP 8.5”. RCP stands for Representative Concentration Pathways, referring to the concentration of human-generated greenhouse gas emissions.

ClimaTracker used yearly averages and other selected data points within the larger data sets in order to make the map timeline as responsive as possible, and to show the general trends of climate change expected in Southern Africa. The model specifically shows how rainfall and temperature has changed since 1971, and predicts how these are expected to change until 2099.

The accuracy of ClimaTracker has been ensured through consultation with various experts, particularly the main brain behind the data, Professor Francois Engelbrecht at the CSIR, as well as Professor Barend Erasmus, director of The Global Change and Sustainability Research Institute at Wits University. 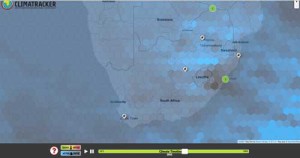 Image above: Projected changes to rainfall by 2045, Source: http://climatracker.oxpeckers.org

“This particular climate change data set performs well when compared to historical data for the 20th century,” says Erasmus. “It does so without relying heavily on the observed values to predict the future, by modelling our understanding of energy fluxes in the atmosphere, and interactions with the land and ocean surface.”

In other words, this model does not extrapolate from today’s data to predict tomorrow’s conditions; rather, it understands what affects temperature and rainfall, and is thus able to model accurately what happened in the past (researchers compared the modelled data to real data to confirm this). So we can trust, as many scientists do, that this model is able to predict future temperature and rainfall with some accuracy. 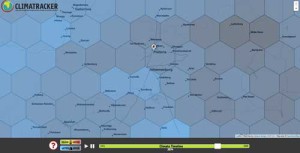 Image above: Projected changes to rainfall in the central part of South Africa by 2074, Source: http://climatracker.oxpeckers.org

“Imagine Phalaborwa’s or Upington’s hot weather in Johannesburg,” says Erasmus, about what a five degree increase really means for South Africa. “The world will be vastly different for our children and their children. Climate mitigation is no longer an option for us; from here on, it’s adaption.”

Climate change will affect all South Africans, in every province. Changes in rainfall and temperature affects food and wine agriculture, water supply, the amount and location of natural disasters, grazing land for farmers and in national parks.

Ultimately it affects our health, safety, food security and many other aspects of daily life. Explore the stories on the map to find out how climate change will affect Southern Africa.

ClimaTracker is a project of Oxpeckers Investigative Environmental Journalism.
It is supported by Internews’ Earth Journalism Network and developed by ScienceLink.
ClimaTracker is available at https://climatracker.oxpeckers.org/