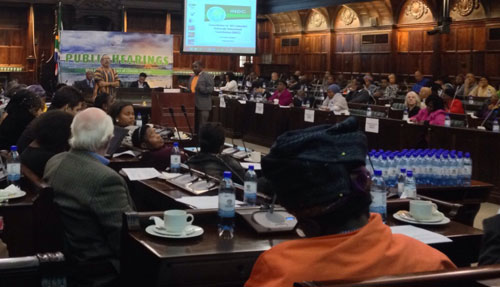 In the lead up to the Paris climate conference, the Parliamentary Portfolio Committee on Environmental Affairs hosted a two day public dialogue on climate change in Cape Town on 22 and 23 September 2015. The hearings provided a platform for South African civil society to give input into the country’s Intended Nationally Determined Contributions (INDC), to ensure that the perspectives of all impacted stakeholders are represented in the country’s negotiation position.

Jackson Mphiwa Mthembu, chairperson of the Portfolio Committee, opened the meeting and introduced Maesela Kekane of the Department of Environmental Affairs (DEA), who highlighted the vulnerability of Africa to climate change impacts and the critical position of the South African government in the negotiations.

Presentations shared in the course of the meeting represented views from an extensive range of stakeholders which included academia, women’s groups, religious leaders and small scale farmers. Reducing emissions was a focal point in many presentations and government was criticised for its lack of consistency and planning in actively reducing emissions.

Bobby Peek of groundWork highlighted the impact of current and future emissions on the health of the people of South Africa and emphasised the importance of Eskom’s responsibility to reduce emissions. Similar views on the increasing use of coal power stations and the role of Eskom and Sasol were shared by Highveld Environmental Justice, Earthlife Africa and the Centre for Environmental Rights. Hilton Trollip of the Energy Research Centre of University of Cape Town gave a passionate and positive presentation on the technical and economic feasibility of a low carbon society while highlighting that this can only be achieved if we remain within our current level of emissions.

Other areas that were addressed included capacity building in local government, unemployment, and the use of finance for addressing the impacts of climate change. A small-scale farmer from Phillipi highlighted the significance of soil conservation in mitigation and adaptation, and Deon Robbertze of the African Climate Reality Project emphasised the importance of climate change education in schools. Highlighting South Africa’s contribution in the G77+China and Africa Group of Negotiators, Tasneem Essop of WWF called on South Africa to be a champion for the most vulnerable.

The input given at the hearings is intended to contribute to improving South Africa’s INDC. The Portfolio Committee on Environmental Affairs, together with other climate change relevant committees, will use the contributions made over the two days to inform a report that will be presented to Parliament.