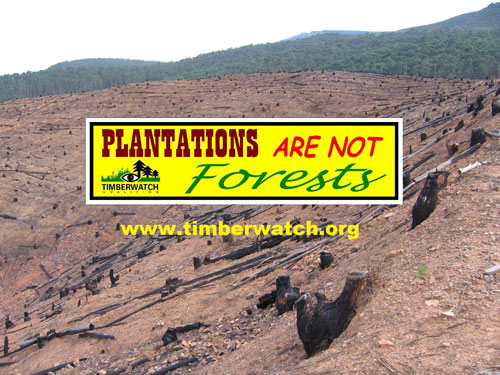 While much of the world has been caught up in economic and political turmoil, a far more serious but less obvious issue is now emerging in many regions: water theft. It is part of a slow, almost imperceptible process which is difficult to detect or to measure, and is therefore seldom viewed as a high priority crime. Yet right beneath our noses vast volumes of water are being misappropriated or polluted by silent thieves that operate 24 hours a day, 365 days a year. The culprits in this case are timber plantations and processing plants. But how can large artificial plantations of alien trees possibly behave so differently from natural forests, which are generally acknowledged as helping to sustain the water supply from natural sources?

Many people assume that forests and tree plantations are the same, because they are both a form of vegetation dominated by trees, but this fallacy can be linked to unexpected water shortages wherever ‘fake forests’ of alien trees have been established on naturally fertile and well-watered areas that had previously been covered by biodiversity-rich forests, grasslands and shrublands. Artificial conversion of land by tree monocultures has negative impacts that those in the timber industry often choose to ignore. Despite the fact that there is conclusive evidence, both empirical and scientific, showing how negatively the three million hectares of formal and feral tree plantations in South Africa impact on the country’s soil, water and biodiversity, the ugly reality has been deliberately obscured by those who profit from it.

The invasive alien tree species used in plantations such as wattles, gums and pines are evergreen, and therefore consume water throughout the year, unlike the natural vegetation which consumes very little in the dry season, usually during winter, when grassland plants become dormant, and the trees shed their leaves. Additionally, the dense leafy canopy of fast-growing industrial tree plantations helps to prevent rainwater from reaching the soil surface. The combination of water lost through evaporation from water trapped in their foliage along with the groundwater that is drawn up from their roots to be expelled through their leaves is called evapo-transpiration.
During the dry season when there is little or no rain, trees suck water from the underground water table or aquifer. This results in localised depletion which in turn causes ground water from adjacent areas to flow towards the depleted aquifer beneath the plantation. This then causes a reduction in the flow of water into natural aquatic systems during the low flow period when it is most needed in order to preserve ecosystem services that support the survival of downstream habitats and human communities.

Those streams and rivers that would normally have flowed throughout the year then flow intermittently, and this leads to localised droughts that have the effect of further compromising the welfare of local communities – of humans and wildlife. Lakes and rivers that previously supplied these communities dry out, and it then becomes necessary for public money to be spent on building dams and pipelines to replace the water lost due to plantations. Apart from stealing water from Nature and people, tree plantations also lead to the dehydration of adjacent natural vegetation, and this has the direct effect of increasing wild fires. Such wildfires devastate the human environment, causing deaths and loss of community resources, as experienced in Australia, Portugal, South Africa, California, and Chile. 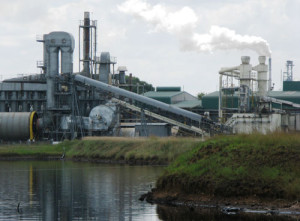 Normally the timber from plantations is processed near to where they are grown, which requires even more water, plus energy (usually of the dirty, fossil-fuel type) to churn out millions of tonnes of paper, packaging, and other products that are not essential for living well, yet pollute everyone’s planet.

The negative effect of the huge amount of water consumed by industrial tree plantations can be matched only by the very worst droughts. Research conducted in areas where land was converted to plantations has shown that their consumption can even exceed the amount of rain that falls where they stand. This has been demonstrated in South Africa by measuring the reduction in stream flow that occurs after grassland catchments have been converted to plantations. A report by Whitmore (1976) describes this as “water piracy” that impacts negatively on both adjacent land uses and downstream ecosystems including wetlands, estuaries and coastal marine habitats.
Tree plantations are in themselves not the real water robbers – they are merely another means whereby multinational corporations and international financial institutions can extract profits from poor developing countries. This unpleasant reality is obscured by all kinds of false claims about plantations, such as their being necessary in order to” take pressure off” real forests, and that they can help to reduce climate change by absorbing carbon dioxide from the atmosphere.

However these unconvincing half-truths are far outweighed by the reality that plantations cause much more ecological damage than they help to avoid, and that the huge volumes of greenhouse gases emitted through the destruction of natural vegetation and the disturbance of top soil that has been absorbing and storing carbon for thousands of years, are far greater than any carbon that may be temporarily stored in plantations before they are cut down and turned into un-recyclable toilet tissue, or other disposable products that end up rotting in garbage dumps or in our waterways.

For more information about the harmful effects of tree plantations visit www.timberwatch.org, www.geasphere.org and www.wrm.org.uy or write to Wally Menne at timberwatch@iafrica.com