By Noel Oettle and Candice Arendse

Globally, precious topsoil and productive land are being lost at an alarming rate, yet little land restoration is taking place, despite the pressing imperative to do so. An area three times the size of Switzerland is lost to agriculture every year.  There are many reasons for this, including divided responsibilities, and in the fact that most of the solutions exist outside the normal focus of governments and development agencies. Degrading land leads to conflict over resource access, poverty, and insecurity.  It is one of the drivers of migration and civil unrest. These issues were addressed at the 3rd Caux Dialogue on Land and Security which took place in Switzerland from 10 to 14 July 2015. 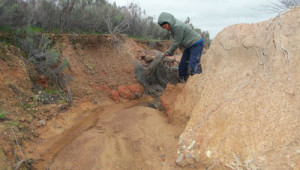 The dialogue created an opportunity for scientists, policy makers and land restoration practitioners from around the world to explore the complexity, successes, opportunities and challenges of advancing human security in a resource-challenged world. During the course of the dialogue, participants shared simple, effective, inexpensive and proven ways of restoring land to its full capacity to grow food, retain water and act as a natural buffer against extreme weather. Emerging practice in multi-stakeholder approaches was also shared, emphasising how important it is to ensure that governments create enabling legal and policy environments for action. This approach directly supports the most poor and vulnerable, helping them find income and more gainful employment on their own land. 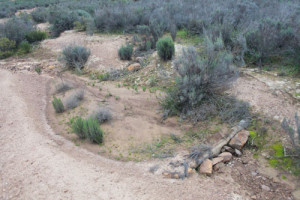 Photo above: Rehabilitation of degraded land via a check dam at Avontuur in Namaqua District, Northern Cape

In his opening keynote address, Rear Admiral Neil Morisetti, the United Kingdom Climate and Energy Security Envoy from 2009 to 2013, emphasised the need to prioritise climate insecurity to address consequent human security issues in energy, water and land, specifically in the global drylands belts. He explained that failing to address climate change issues in this regard might create domino effects, leading to increased human migration and increased pressure on systems and governance in certain regions.

During the dialogue, alarming global statistics and issues were shared. For example, Youssif  El Tayeb El Nour of the Darfur Development and Reconstruction Agency provided insight into how resource competition and depletion have played a key role in the humanitarian disaster in the Dafur region of Sudan.  Over four million people have been affected by the conflict in Dafur, where more than half a million people have been displaced from their homes and many are forced to live in refugee camps.  Experiences were also shared of “virtuous circles” that link peace-building initiatives with restoration of land-based resources.

Land use forms the point of convergence for such priority items on the global agenda as water and food security, extreme poverty, climate change, conflict and mass migration. On average, six to ten inches of topsoil is all that separates stability and conflict, yet the central importance of land is obvious in the world’s drylands, which used to feed about 40% of global population. As land is lost and the populations grow, conflict increases as more and more people compete for what remains. Eighty per cent of the world’s conflicts now take place in its drylands, and countries under particular pressure risk becoming failing states.

Guillaume Benoit, Advisor for Food, Agriculture and Rural Areas in the French Ministry of Agriculture, addressed the closing session of the Dialogue. He noted that the engagement of farmers in the food value chain is essential to enable them to derive improved benefits and to become more empowered as land managers. He also pointed out that agro-ecology is actively supported and implemented in France with a high success rate. France aims to have 50% of its farms using agro-ecological methods by 2025, and expects that the nation will benefit through improved water use and storage in the soil, enhanced food security, reduced greenhouse gas emissions, enhanced carbon sequestration, and reduced urban sprawl. France is committed to fighting poverty and food insecurity, and to implementing the three Rio Conventions via agro-ecology.

Successful technologies and sound approaches to the problems of land degradation abound, and can contribute significantly to efforts of land-using communities to adapt to climate change and ensure the sustainability of their livelihoods and communities. Focused political effort will be needed to ensure that investments in land, especially those undertaken under the UN system, result in the well-being of local land-using communities.