We have recently entered the age of “Climate Services”. Climate research centers, government institutions and consultancies across the world are increasingly involved in new activities to provide expertise, data and guidance to inform climate risk management and climate change adaptation decision making. The American Meteorological Society defines climate services as, “Scientifically based information and products that enhance users’ knowledge and understanding about the impacts of climate on their decisions and actions.” This and other available definitions of climate services therefore positions scientists and climate information providers as the bearers of knowledge, able to inform whatever application or decision is being made. While this version of data-led climate services can be very helpful, in Africa, where development and adaptation to climate change often go hand-in-hand, conceiving climate services as a one-way flow of information (even if tailored) appears to be a limited model for how climate services should be framed. At a recent workshop in Accra, an alternative approach to climate services was explored. As one of the workshop facilitators, I was lucky enough to be involved in this fascinating learning experience. 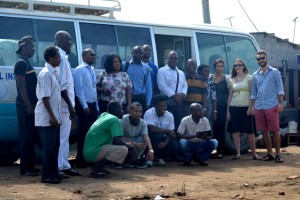 An unconventional approach was adopted in the workshop: rather than being climate data-led, the workshop trialed a “co-exploration” approach where facilitators and participants collaboratively explore the vulnerability of a specific place to various climate and non-climate stresses. The workshop prioritized the establishment of non-climate vulnerabilities in real-world settings chosen by the participants from the two cities. The two groups selected areas containing formal and informal settlements in low-lying areas vulnerable to flooding and coastal inundation. The non-climatic and developmental challenges facing the chosen communities are profound. A data-led approach to exploring climate change adaptation would have begun with a narrow framing of increased flooding and sea level rise, immediately focusing attention on these aspects of the problem. However, allowing the participants to contextualize the vulnerabilities using their place-based knowledge resulted in the highlighting of issues such as weak law enforcement for building codes, inefficient or non-existent waste disposal and tensions between the local communities. It became immediately apparent that only by acknowledging these issues upfront can suitable climate change adaptation strategies and interventions be identified. 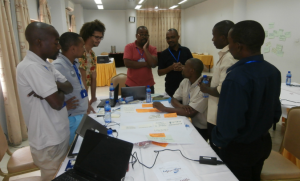 On the final day of the workshop we visited Dansoman to see how the issues we discussed are affecting the communities. There are clearly fundamental development challenges that need to be addressed in considering adaptation to current climate variability and future climate change in such an area. Using a bottom-up vulnerability first approach, and co-exploring the adaptation needs of the communities in an interdisciplinary setting, seems to offer a constructive way forward that could facilitate a decision making paradigm that improves the livelihoods of such communities.

Based on my experience in Accra and other similar activities, I would argue that the type of climate services needed depends on the stage at which the climate service provider is engaging with the decision makers. If the interaction occurs early on in a decision process, for example in the scoping phase of a project, then it is especially important to explore the complexities of the decision problem and understand what combinations of factors are really driving vulnerabilities. The co-exploration approach seems particularly promising in this context. However, if the interaction is much later in the process, when the problem has already been scoped and possible interventions identified, then a co-exploration approach would be less relevant; the climate information needs are likely to better served through the conventional approach to climate services. It is therefore important that climate service providers are able to adopt a suite of different approaches.

So it seems apparent, and I am not the first to say this, that we need to have a broader range of framings, approaches and methods within the domain of climate services for scientists and information providers to succeed in contributing towards more informed decision making. We need to question the current definitions and approaches that assume scientists have all the answers and it is just an issue of packaging. Moreover, we need sustained engagement (something not possible in our pilot study) to develop the co-exploration approach further in the context of real, complex decision-making. There is much more to be done!

The full version of this article can be viewed on the CDKN website.