Botswana is a region in which rainfall varies substantially from one year to the next. So far this year, the Okavango Delta, in the northwest of the country, has received an unusually high amount of rainfall and while this is welcome news to some in the farming and tourism sectors, it has negatively impacted many other people. However, recent work by Wolski et al (2014) shows that such events are getting less, rather than more, likely. Climate change is altering the frequency and magnitude of rainfall events, which has an impact on the likelihood of droughts and flooding, and increasing temperatures are changing the nature of climate risks. Evidence in the latest Intergovernmental Panel on Climate Change (IPCC) assessment report shows that temperatures in the region are projected to rise by as much as six or seven degrees Celsius by the end of the century, under a high emissions scenario. There is therefore an urgent need to address the challenges associated with climate variability and climate change in Botswana.

Meeting these challenges and responding to other societal stressors while maintaining economic growth requires decision makers and politicians to make choices that in some cases are associated with trade-offs. Nowhere is this more apparent than in the Okavango Delta where a growing tourism industry is fuelling the local economy and, at the same time, placing evermore pressure on the unique environment that attracts tourists from all over the world. Maun, a town of 55,000 people, is the tourism capital of Botswana and the gateway to the Delta, and this was the location of a four-day workshop on climate change facilitated by scientists from the Climate System Analysis Group (CSAG) at the University of Cape Town, together with climate change adaptation experts from Indigo Development & Change and One World. 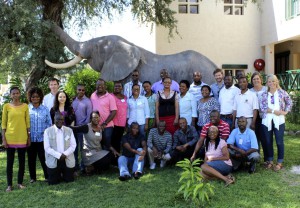 The Government of Botswana, with support from the Common Market for Eastern and Southern Africa (COMESA) and the United Nations Development Programme (UNDP), has commissioned a team of consultants to develop a National Climate Change Policy, Strategy and Action Plan. It is hoped that the plan will be passed in July 2014 and implemented soon after. In the meantime it is the job of the supporting the Technical Reference Committee (TRC), appointed by the Government of Botswana, to oversee the formulation of the plan. To enable the TRC to fully scrutinize the plan, USAID, through the Resilience in the Limpopo Basin Project (RESILIM), and in collaboration with the Southern Africa Regional Environmental Program (SAREP), organized a training workshop. The workshop was held at Maun Lodge from the 3rd to the 6th of April 2014.

The workshop began with a very exciting, and unexpected, visit from honorable minister Tshekedi Khama, Minister of Environment, Wildlife and Tourism, Botswana. He emphasized the commitment of the government to dealing with the challenges of climate change and stressed the importance of the workshop. 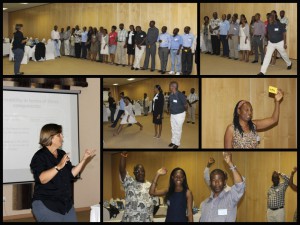 After the workshop, members of CSAG and Indigo travelled to Gaborone for a breakfast meeting attended by approximately 40 ministers, heads of department and key government officials, all with an interest in the issue of climate change. This presented a rare opportunity to meet with policy makers and key decision makers to discuss the latest science and demonstrate the need to address climate change issues. Those attending were thoroughly engaged and in the discussion it emerged that people felt it especially important for Botswana to be taking these issues seriously.

But the trip wasn’t all work! Away from the hotels, we were able to enjoy the hospitality of the Batswana people and take in the magnificence of the environment. Thanks to the adventurous spirit of Piotr Wolski – who currently works at CSAG but spent over a decade working at the Okavango Research Institute – while we were in Botswana, we were able to sample the beauty of the Delta and gain a better understanding of what is at stake as climate change alters the environment, impacting society and the economy in Botswana.